2023 Presidency: Ndigbo should put their house in order- George Moghalu 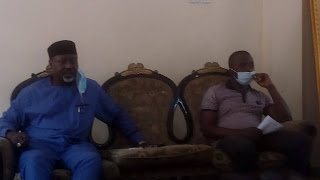 The Managing Director (MD) of National Inland Water Ways (NIWA) Chief George Moghalu has called on Ndigbo to work hard in their bid towards ascending the presidency, in 2023.

Chief Moghalu made this known in an interactive session with newsmen at his country home in Nnewi. He said that the need to work hard has become imperative because power is not given, rather power is taken.

He said since the inception of democracy in Nigeria that Igbo's have not ascended the presidency, stressing that, there is need for Ndigbo to sit down and get organized for the Igbo presidency project.

“Every zone wants to have the presidency, for me, I will like the Nigerian president to come from Nnewi, possibly from my family, because of the positive impact it will have on the community.

“But the truth is that we are not talking about president of Igbo nation,  but a Nigerian President who will be from Igbo extraction. If we fully realize the enormity of the project, we have to put our house in order so that we can constructively engage people from other zones to get the needed number to ascend the presidency because its a game of numbers.

“There are two political platforms with which one can prosecute the presidency in the Nigeria of today, that is the Peoples Democratic Party (PDP) and the All Progressive Congress (APC), what I expect us to do is to work hard towards making Ndigbo win the presidential primaries of the two political parties so that it can be a win-win situation for us.” He said.

Chief Moghalu said emphatically that all hands must be on the deck to actualize the Igbo presidency project, because of its importance towards national development and synergy.

On why he wants to be the Governor of Anambra State and what he intends to do differently, Chief Moghalu said that he would create opportunity to assess his government, because he will do things differently from what obtains now, because he already have a plan on how to handle the diverse areas affecting Ndi Anambra, be it healthcare, road infrastructure, education, etc.

He said that he has never criticized any government without coming up with solutions noting that there are things that the government of the day is doing that he would not happen under his watch.

“I have program for all the sectors, you really have to understand what you are doing to be the governor, Anambra State is very rich in human capital, what the government need to do is to create an enabling environment for these successful, committed and determined Ndi Anambra who are blazing the trail in every field of human endeavors to keep soaring high.” The NIWA boss insisted.

Asked to comment on the spate of borrowing that has characterized many administrations, Chief Moghalu quipped that the question should be what has been done with the generated revenue, because when funds are borrowed to invest on trivial projects that can't return on funds invested it becomes a problem.

He however said that borrowing is not entirely bad in itself if the loans taken are invested on investments like infrastructure that has the capacity to pay back the loans.

Chief Moghalu furthermore stressed his ZIMUZO Development Foundation, was conceived to help the very poor in the society through apt interventions in different areas of the society. He said the foundation has a housing scheme for widows, empowerment for the downtrodden and training workshop for youths among other interventions for those who life is not fair to.

He further restated his earlier call for the validation of the All Progressive Congress register in Anambra state, so that their party will have a credible register that can be used to validate who are there members in the state, for administrative and operational reasons, he concluded.