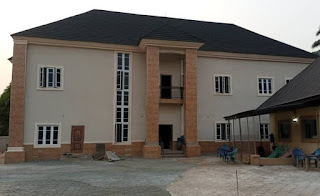 The National President of Ndiakwu Otolo Nnewi, Hon Jude Osumouh has restated the readiness of his community to officially open its ultra modern hall and event complex on the 31st of December 2020.

He made this known yesterday, while interacting with newsmen at his office. He went down memory lane to recount the exploits Ndiakwu Otolo Nnewi community has made in the past in Nnewi, stressing that his community have also led the way for others to follow. He said as pacesetters, his community in 1973 established the first vigilante group in Nnewi to combat crime. He said that was possible because of the unite of purpose which has been the benchmark of his community.

He however commended the efforts of Chief John Anya(Omeifeukwu Nnewi) a man he described as a high spirited individual, who used his personal resources to sponsor the activities of Ndiakwu Otolo community from 1970 till the period he handed over power. He went on to state the fact that it was Chief John Anya that created all the access roads in the community, without any contribution from anybody. He went on to state that all this would not have been possible without the assistance of Chief Daniel Odum Udeze, who was at the home front to coordinate all the affairs of the community.

Hon. Jude Osumouh went on in a special way to thank all the past President General's of the community whom he said helped him tremendously to get at the level where he is now.

He went further to recount that when he took over the reins of leadership in the community, in 2013, that the community hall built in 1970 had collapsed, which made him to insist that a new and befitting ultra modern hall should be built in Ndiakwu, which will serve as a common place for meeting. He said that, when he conceived the idea of building the hall, most people thought it was an impossible mission, but to the glory of God, he said he was amazed at the support that was given to him by stakeholders and all the members of his community, which he still appreciates, for without them, the project won't have been completed he said.

He thanked in a special way, stakeholders, board of trustees, National Patrons, executive and everyone in the community that helped in one way or the other to make the dream come true. He however thanked in a special way Dr Cletus Madubugwu Ibeto (CON) and Senator Dr Patrick Ifeanyi Ubah for the great support and role they played in making the dream come through. He thanked Mr Johnray Okonkwo JP whom he said groomed him and commended him for the great support he gave him throughout the duration of the project.