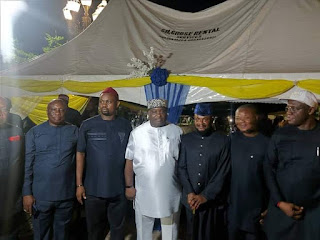 Anambra South Senator and Convener of Anambra Progressives and Development Union ( APDA), Dr. Patrick Ifeanyi Ubah was at Nnobi yesterday to celebrate with the Chief Executive Officer of SEAMAN Group over the conferment of Lord Mayor title on him by the Abalukwu Elites Forum.

Speaking briefly at the event, Senator Ubah who was the special guest of honour, described the title received by the SEAMAN boss as an honour well deserved.

The Prince of the Senate and Senator representing Anambra South Senatorial District , Dr Patrick Ifeanyi Ubah who was accompanied to the event by the Diaspora Chairman of Anambra Progressives And Development Union (APDA),Barrister Peter Nwosu further commended Chief Agbanari who is also a frontline  progressive member for his efforts towards the promotion of the  wellbeing of the people. Senator Ubah also took out time to  appreciate  him specially  for his selfless contributions towards the actualization of the visions of the Anambra Progressives And Development Union.

According to the Anambra South Senator, the contributions made so far by Chief Agbanari and other Progressives made the actualization of the Awka and Nnewi medical and isolation centre projects a dream come true. He further announced that he has also promised to donate more to the group as it prepares to embark on the construction of an Inland terminal in the state.

Responding, the recipient commended members of Abalukwu Elites Forum for finding him worthy of such an honourable title and promised never to let them down. He also commended Senator Ubah for his drive and vision as well as the  giant efforts he has made through the Anambra Progressives and  Development Union that have already culminated in the delivery of  ultramodern medical facilities in Nnewi and Awka, and reassured him of his continuous support.

Other dignitaries at the event include members of Abalukwu Elites Forum and the community members.