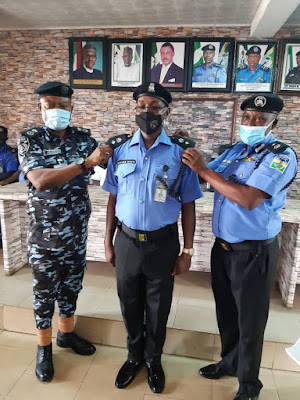 .........Task them to rededicate themselves towards national service.

The commissioner of police in Anambra state, CP John Abang, following approval by the Police Service Commission for the promotion of Senior Police Officers on the recommendation of the Inspector-general of Police *IGP Mohammed Abubakar Adamu NPM,mni,has decorated 21 police officers in the command.

The Commissioner of Police Anambra State Command CP John B.Abang,fdc congratulated the newly promoted officers from the command and urged them to put more efforts in discharging their duties of promoting safety and security not only in the State but the Nation at large.

The CP also tasked them to rededicate themselves to national service and reciprocate the gesture done to them by the Inspector-General of Police.

He equally thanked the IGP Mohammed Abubakar Adamu NPM,mni,for giving personnel welfare a top priority in his administration and assure 'Ndi Anambra' that the Command under his watch will continue to serve and protect the citizens with integrity.