Metuh Jets out to UK for Medical Treatment 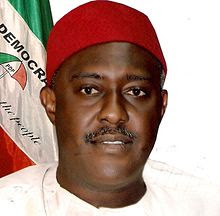 The former PDP spokesman was sighted at the Nnamdi Azikiwe International Airport, Abuja on Wednesday evening on crutches, accompanied by some family members and close associates.

Reprieve came to Metuh following December 16, Appeal Court judgement annulling his conviction by Justice Okon Abang on the grounds of bias, consequent upon which Justice Nkeonye Maha of the Federal High Court, on December 24, granted him bail, and ordered the release of his international passport for a period of 45 days to travel within and outside the jurisdiction of the court.

It would be recalled that Justice Abang had rejected several applications by Metuh to travel for medical treatment. At some point, the trial Judge ruled against receiving any medical report from any hospital or doctor in Nigeria and Metuh was brought to court from his sick bed on a stretcher.

However, in his ruling, Justice Maha granted Metuh bail in the sum of N250 million and a surety, who must be a responsible citizen and owner of a landed property within Abuja, with value not less than the bail sum.

Justice Maha also ordered Metuh to return his international passport to the court within three days from the date of his return.

Commenting at the airport, one of his associates noted that the PDP spokesperson “had gone through the most horrendous ordeal in the last five years”.

According to the associate, “Chief Metuh has passed through a lot. Only his faith in the Almighty God kept him so strong. We thank God for this opportunity for him to get his medical treatment and move on with his life. We are deeply encouraged by the prayers and well wishes of most Nigerians in this travail.”

In annulling Metuh’s conviction, the Court of Appeal, in a unanimous verdict read by Justice Stephen Adah, held that Justice Abang showed manifest bias in the trial.

The Appeal Court held that Metuh’s trial was conducted in a hostile atmosphere without any regard to the constitutional right of the person accused and as such cannot be upheld.

“The learned trial judge unfortunately has shown the whole world that much was into that judgment than what was put in evidence before the judge.

“It was in this respect that we cannot ignore it. This court in its duty, set that decision aside. Judgment of the lower court delivered on 25th of February 2020 cannot stand because of the evidence of bias. It is accordingly annulled”, the Appeal Court held.