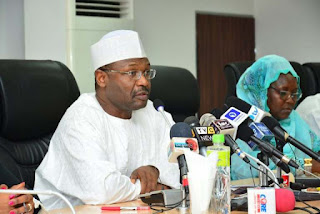 Prof. Mahmood Yakubu on Thursday assumed office for a second term as Chairman, Independent National Electoral Commission INEC. Yakubu had arrived to a rousing reception by INEC headquarters staff and guests at about 11:20 am and went into a closed-door session with the national commissioners. Thereafter, at a brief ceremony to formally take over affairs of the commission, Yakubu pledged to discharge his mandate without bias.He said he had steadily strengthened the institutional capacity of INEC to carry on with its mandate even in the absence of a Chairman. Before handing over the reins of leadership, Muazu congratulated Prof. Yakubu on his reappointment.He explained how the commission had carried on for the past month and said invaluable lessons were learned from the conduct last weekend’s bye-elections. According to Muazu, INEC was confronted with several challenges, especially security during the bye-elections, lamenting the loss of six police personnel who drowned in Bayelsa State. Yakubu had on November 9 handed over affairs of the commission to a National Commissioner, Air Vice Marshal Ahmed Muazu (retd)The development followed the expiration of his first tenure of five years. President Muhammadu Buhari had on October 27 reappointed Prof. Yakubu for a second term of five years. Yakubu and five National Commissioners were first sworn in on 9th November 2015 followed by another six National Commissioners on 7th December 2016 and one more National Commissioner on 21st July 2018. However, Yakubu was again sworn in for a second term on Wednesday by President Muhammadu Buhari following his clearance by the Senate.