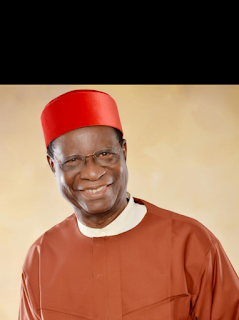 The former Police Service Commission Chairman, Chief Simon Okeke has insisted that the issue of having an Igbo man as the next President of Nigeria come 2023 is sacrosanct. He made this assertion recently in an interactive session with select Journalists in his Akatar Lodge residence in Amichi Anambra state.

Okeke averred that Igbo people of the South East extraction have sound materials for the position of the president, and urged Nigerians to give the South East the opportunity to serve the country in that capacity.

“Since inception of this country, Nigeria has not had an elected president of the South East extraction. All other geographical zones have had their own fair share. This region has people, who if given the opportunity to become president, can turn the fortunes of the country around. Therefore, continued deprivation of the region the opportunity to produce president does not, in any way, show justice, equity and fair play.”

On the just concluded Election in Anambra, the Former chairman of the Police Service Commission (PSC) Chief Simon Okeke, stated that for the Anambra State governor-elect, Prof. Charles Chukwuma Soludo, to succeed in his administration, he must be wary of greedy and rapacious politicians, who would be hovering around him, and advising him to share the money meant for the development of the state.

Okeke said that Soludo should learn from former governors, who failed by reason of listening to avaricious politicians, who masquerade as godfathers; as well as those that succeeded by shunning greedy politicians.

“The governor-elect has the capacity to take Anambra to the net level giving his knowledge, antecedents and vast connection. For the little time I interacted with him, I found in him a person who has the capacity to turn the fortune of the state for the better,” Okeke said.

“He promised that he has the international connection that would make the light of the state to shine better, and to leave the state better than it is presently. We all believed him because of the legacy he left at the banking sector, when he was CBN governor.

“My advice to Soludo is that he should avoid greedy and avaricious politicians. Such people can frustrate any administration, and are capable of stopping any government from fulfilling election promises to the people. Citizens of Anambra hold Soludo him to very high esteem, and that was why he received massive support during the governorship election. He must not betray this confidence,” he added.

Speaking on the activities of the Indigenous People of Biafra (IPOB), the former PSC boss urged the federal government to address injustice, which he said, led to agitations.

He said, “I will advise the Nigerian government to address injustice. Agitations by IPOB arise from marginalization, inequality and lack of level playing ground for all to operate. Where there is no justice, agitation will continue to reign. I believe strongly that if there is equity, agitations will die down.”