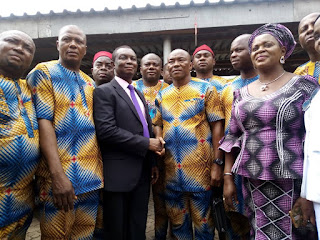 A lagos based association, Elite Fitness Club, today, visited the Nnamdi Azikiwe University Teaching Hospital, NAUTH, Nnewi, Anambra State, where they paid off hospital bills of patients, who had no means of offsetting their bills.

Nigerian Notch, reliably gathered, that many patients in the hospital have stayed longer than normal at their various wards, because of their inability to pay their hospital bills.

The group, on arrival, paid courtesy visit, to Chief Medical Director of the Hospital, Prof. Anthony Igwegbe, also went round different wards in the hospital where they met and had a heart to heart talk with patients.

Addressing newsmen, the leader of the team, Chief Amobi Ike, said the visit was part of their  annual visitation where they visit hospitals or destitute homes to give succour to the poor and needy.

According to him, a total of one hundred patients were targeted to benefit from the largesse; and that the group spent approximately five million naira on the mission."

While expressing appreciation to the group for their magnanimity in offsetting bills of "very poor patients" in the hospital; the Chief Medical Director, Prof. Anthony Igwegbe, said, "Many patients remained in their various wards for too long after recovery because of their inability to pay their bills. Some of them hardly feed well, while some, for lack of spaces, are no more on hospital beds; so you see the reason why such people should go back to their various homes.

"This hospital has been facing challenges of patients not being able to offset their bills after treatment, and it has been affecting the hospital's purse negatively; this is why we are grateful to Elite Fitness Club, for their intervention.
We also look forward to receiving such magnanimity from other spirited individuals and groups."

One of the patients, who benefited from the offer, Catherine Akukwe, commended the group, while also thanking God for relieving him of the burden of heavy hospital bill, which he has been battling with.

Mrs Akukwe, who had recovered from a major operation, said she was in the hospital for additional two months beyond the time she was discharged, waiting patiently that her family would raise fund to offset her bill, which did not happen