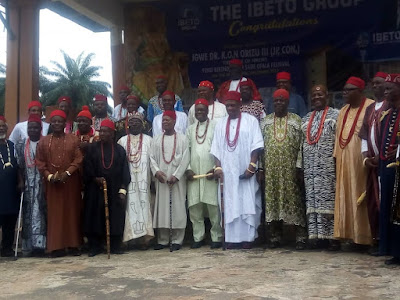 Traditional Rulers under the aegis of Anambra South Senatorial Traditional Rulers Forum, have called on President Muhammad Buhari to intervene in the  rift between the Guarantee Trust Bank Plc and Chairman of Innoson Group, Chief (Dr.) Innocent Chukwuma; which they said, has lingered through the courts over the period.

In a statement made available to newsmen at the palace of Igwe Nnewi yesterday and presented by the traditional rulers, which was signed by the Grand Patron of the forum, Igwe

(Dr.) Kenneth Orizu III of Nnewi with thirty other traditional rulers, the monarchs averred that the intervention of Mr. President has become expedient so as not to allow "the little crisis degenerate into a bigger crisis that will be difficult and costly to resolve."

The forum specifically condemned the roles of the Economic and Financial Crimes Commission, EFCC, in the persecution of the renowned industrialist, and their involvement in the pending matter.

"The Royal fathers of Anambra South Traditional Rulers Forum, used the opportunity to call on President Muhammadu Buhari to look into the roles and activities of the EFCC on the ongoing business dispute between the Guarantee Trust Bank PLC and Innoson Nigeria Ltd.

" It has become obvious that the EFCC is not following laid down procedures and judicial precedence in the prosecution of the alleged trumped up charge against our son, Chief Innocent Chukwuma and his company, Innoson Nigeria Ltd.

"As leaders and elders of the land, knowing fully well the consequences and crisis the roles and activities of the EFCC may cause, we have decided to use this medium call on you, Mr. President, to call EFCC to order on this matter so as not to allow this little crisis degenerate into a bigger crisis that will be difficult and costly to resolve."

While recalling several ordeals suffered by Innoson boss in the hands of the anti graft agency; especially how he was bundled out of his house like a common criminal by EFCC, that invaded his Enugu residence in the middle of the night of 19th December, 2017; the monarchs wondered why EFCC will persecute such a distinguished Nigerian, who did not only parade four national honours to his credit but have provided direct employment to over 7,000; persons and indirect jobs to over 15,000 Nigerians. "This, to us, is an insult," the forum opined.

While calling on Buhari to call to order the EFCC Chairman, Ibrahim Magu, they as well asked the president to stop displaying elements of bias in the said dispute, the monarchs also called on the IGP and the Lagos State Police Commissioner, to "dutifully and responsibly" investigate the recent attack on Prof. McCarthy Mbadugha, Innoson's lawyer, by assassins believed to have been sponsored by Innoson's opponents; with a view to arresting the perpetrators and unravelling the reason behind such attack.
Email Post