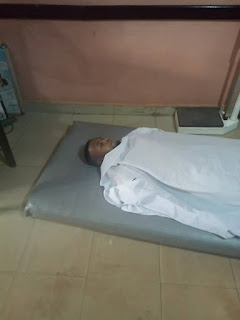 Anambra State was tensed up on Wednesday, November 7th 2018, when a Fuel Station Manager at NENCO Fuel station was murdered by his employer.

The deceased, whose full identity was not verified at the time of filing this report was said to be a member of Aghazu family in Nnewichi; and works as a manager at the fuel station.

Problem started when his employer (names not ascertained); told him to immediately provide the sum of N40,000 which he said was missing from the company's purse.

Our reporter learnt that the manager begged his employer to bear with him, and deduct the said sum from his November salary; but the director of the fuel station declined and insisted that the money must be provided instantly.

What seemed to be a mild drama turned bloody, when the director of the company in a desperate move to recover the said money, stabbed his employee several times with screwdriver before he collapsed.

He was rushed to the Rose of Sharon Specialist Hospital, along Oba Old Rd., Nnewi, where doctors confirmed he was dead.

The director of the fuel station disappeared from the hospital immediately his employee was pronounced dead.

The body of the deceased was however taken away to an undisclosed destination by police operatives in Nnewi.

The Anambra State PPRO, Haruna Mohammed confirmed the development when contacted but said the headquarters is yet to get full detail of the incident.