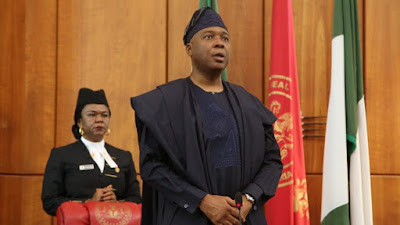 Nigerian Senate Pesident, Bukola Saraki, has asked the lawmakers to fast track the passage of police reform bill.
“The Police Reform Bill which we have put forward, should have gone for public hearing and should have been passed by now.
“It touches on issues that will address the professionalism that should be enforced in the Nigerian Police Force,” Saraki said.
“Let us ensure that we pass this Police Reform Bill within the next two weeks so that we do can a public hearing on it,” he added.
This is coming after the Deputy Senate President Ike Ekweremadu, his wife Nwanneka Ekweremadu, and son Tuesday survived an assassination attempt at his Apo Quarters in the country’s capital, Abuja.
Following the Tuesday incident the Nigeria police said the country’s deputy senate president was a victim of burglary attempt and not assassination as he claimed.
“Preliminary investigation carried out so far did not reveal assassination attempt on the life of the Dep Senate President, Sen. Ike Ekweremadu and his family but a case of Burglary,” Nigeria Police tweeted on Tuesday.
However, Ekweremadu has tagged the police report untrue and claimed there was no proper investigation done by the force.
“No thorough investigations were made by the police. My son, who was hospitalized, was not even interviewed by the police,” Ekweremadu said.
“The police looked at the CCTV footage but could not figure it out.
Saraki, however, said the police report over the unfortunate incident is due to “lack of leadership in providing a non-partisan professional approach for some of these issues.”
He, therefore, asked the house to “fast track” the Second Reading of the Police Reform Bill and fast-track it so that they can pass that bill that will “effectively address that issue.”
The senate president also urged the security agencies to thoroughly investigate the attempted assassination of the Deputy Senate President.