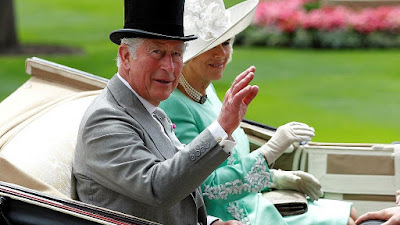 The Nigerian Navy hosted the in Lagos on Wednesday in continuation of his three-day business and cultural tour of Nigeria.
The News Agency of Nigeria (NAN) reports that the Prince of Wales, who arrived the Naval Dockyard in Victoria Island at 1:46 p.m., was received by the Chief of Naval Staff, Vice Adm. Ibok-Ete Ibas.
After being ceremonially received by the Naval chief, The Prince of Wales was taken on a tour around Lagos waters on the Nigerian Navy Ship (NNS) EKULU.
The prince was piped on-board by the Commanding Officer NNS EKULU, Commander Andrew Zidon.
Speaking with journalists after the departure of the prince, Ibas said that the visit was an encouragement for the navy.
The Nigerian Navy is an offshoot of the Royal Navy and he is also here to see by himself the progress being made with the cooperative support the royal navy has been giving Nigeria,” he said.
NAN reports that Prince Charles and his entourage had earlier arrived Lagos aboard a B737 aircraft with registration number CS-TFY, which landed at the Presidential Wing of the Murtala Muhammed Airport at 12.08 p.m.
He was received by the Deputy Governor of Lagos State, Mrs Idiat Adebule, officials of the United Kingdom Consulate and security chiefs.
The prince’s three-day business and cultural tour of Nigeria is also to mark the 75th Anniversary of the British Council in Nigeria.
Charles had arrived Nigeria on Tuesday alongside his wife, Camilla and were received by President Muhammadu Buhari at the State House in Abuja.
The prince also met with notable traditional rulers as part of efforts to build peace in the Middle Belt and other parts of the country.
Credits: NAN