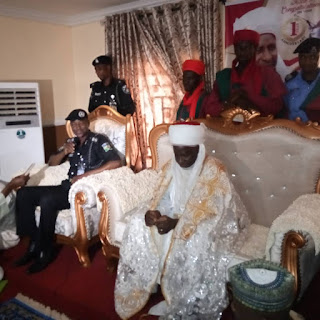 The Commissioner of Police in his opening remarks reaffirmed that, the ongoing peace and dialogue initiative which started from Gusau through series of meetings and interactions with all the warring groups is being carried out with all sense of sincererity, Justice  and commitment which led to the relative peace being enjoyed in the state.

He assured the Emir and the people of Birnin Magaji that the police will not rest on their oars until lasting peace and security are restored to the state.

He thanked Governor Mohammed Bello Matawallen Maradun who he said is a peace loving leader who places security and peace of Zamfara State the paramount attention, it requires.

The CP  therefore called on the people of Birnin Magaji to support the peace process so as to regain the socio - economic well being of the area.

In his remarks, the Emir of Birnin Magaji Alhaji Hussaini Usman Mode, thanked  CP Usman Nagogo for his dedication and commitment to the peace of Zamfara state and assured the Commissioner of police that the people of Birnin Magaji Emirate will support the ongoing peace pact to the latter.

During the meeting, deliberations were extensively made by the various warring parties, after which they all agreed to forgive and forget of all that had happened in the past for peace to be restored and sustained in the state. They also promised to work closely with one another to ensure the success of this initiative.
Similar interface and meetings will be extended to other Emirate councils in the state, in due cause.
Email Post