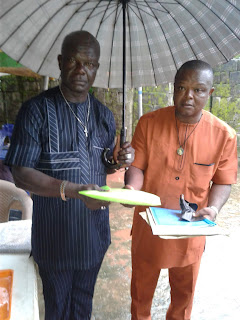 The immediate past Chairman of Nnewi Butchers Association,Chief Amobi Nnoruka (Ogbuefi Okwuanasoanya) has officially handed over to the newly elected officials of the association, now led by Chief Uchenna Okafor.

In his valedictory address at the handing over ceremony held at Chief Amobi Nnoruka's residence, in Okponuegbu Umudim Nnewi, Chief Amobi Nnoruka thanked God for making it possible for him to pilot the affairs of the butchers in Nnewi for 8 years without any issues.

He thanked members of the association in Nnewi for the support and assistance given to him, which made it possible for his smooth sailing, through out the period of his stay in office, as no case of epidemic surfaced as a result of cows that were sold to people in Nnewi axis.

He congratulated the new Chairman and his excutives , Chief Uchenna Okafor, prayed that God will give him the strength, and wisdom to pilot the affairs of the association in Nnewi.

In his acceptance speech, Chief Uchenna Okafor thanked the immediate past Chairman for his strength and doggedness throughout his regime in office.

He however promised to build on the achievements of his predecessor by highlighting on the very needs of it's members in the market, especially on the issue of government approved slaughter houses in Nnewi, and to also ensure that the meat sold to the general public in Nnewi meets the standard, required of it.

In the same vein,
Chief Amobi Nnoruka used the opportunity to recognize the efforts of their members who have helped to sustain the growth and development of Butchers in Nnewi. They are: Chief Uchenna Eze, Chief Simon Osaia, Mr Osita Amaefuna and Chief Christopher Onyetube he conclud.
Email Post