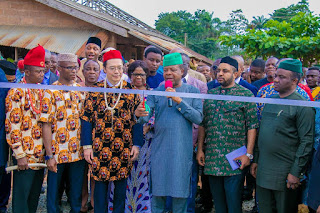 Governor of Imo State, Rt. Hon. Emeka Ihedioha CON, has enjoined Imo citizens to always take advantage of their contacts and positions to attract development to the state, reiterating  the readiness of his administration to partner with such persons or organizations.

The governor stated this at the commissioning ceremony of the 100 solar powered street lights, built and donated to the people of Ezeagbogu, in Ezinihitte LGA by the Japanese Government in corroboration with Development Dynamics and Ufotonnie International Ltd, on Tuesday.

He maintained that his administration is focused on encouraging Imolites and foreigners to join in the rebuilding project for the benefit of all and sundry.

"I associate myself and Government of Imo State with positive developments for the good of our people. I thank our brothers who facilitated this project. It is a matter of fact that development is influenced, so when you have a privileged position, you must take advantage of it to benefit humanity.

"Now that the Japanese government is part of us, it will not be out of place to seek an extension this gesture to other parts of the state”.

He mandated the community to set up a maintenance and security committees to see that the project is maintained and secured, stressing, that security is the collective responsibility, and therefore charged the community heads, youths and members of the public to safeguard projects in the state.

Earlier in his speech, the Japanese Ambassador, Mr. Yukata Kikuta, commended Governor Ihedioha on his development initiatives and assured of the continued partnership with the state government.

He said, "Japan is strongly committed to supporting Nigeria as declared at the Sixth Tokyo International Conference on Africa Development (TICAD VI). One of its themes was the promotion of social stability for shared prosperity and this project is part of our commitment to the socio-economic development of Imo State.

Highlights of the event included the official commissioning of the project and the conferment of chieftaincy title of Enyi Ukwu 1 of Ezeagbogu on the Japanese Ambassador  by the traditional rulers of the area.
Email Post