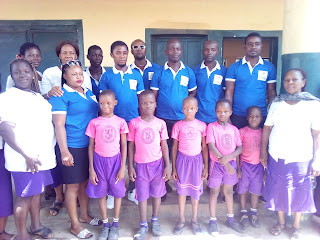 The Nnewi Progressive Youth Movement yesterday took the teacher's and Pupils of Ndiakwu Community Primary School by surprise. The surprise was certainly a pleasant one as they came to pay the tuition fees of the best performing Pupils in the school from Primary 1 to Primary 6.
While interacting with Nigerian Notch the leader of the group Nelson Okeke said they were in the school to pay tution fee for Pupils who came tops in their various classes, a gesture he said was to encourage them to aspire higher in their pursuit of education. He however said that what they are doing as a group is to touch the lives of Pupils in schools throughout Nnewi, a measure he said will take them round the four quarters of the town. He therefore called on well meaning individuals to support the cause of the group which is to promote education in Nnewi town.

The Pupils who received the gifts were very thankful to the group for the appreciation, and promised to continue excelling in their studies.
In her vote of thanks the assistant head teacher of school Okoli Benedict was very thankful for the good work God is using to group to do, and called on the group to continue with their good works.
Email Post