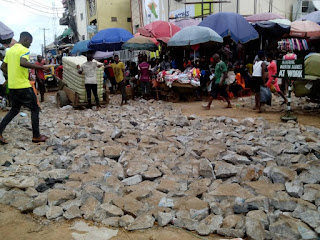 In their bid to avert death in Marine Modern market, Onitsha, Anambra state, sequel to the dilapidated state of some portions of marine road in the market, the traders, have commenced
rehabilitation of the said portions.

The chairman of the market, Chief Uzomili Onyeabo made this disclosure to newsmen in Onitsha,recalling how traders and their customers had on several ocassions escaped death by the whiskers because of the bad portions of the road.

He said, "each time a vehicle passes through this marine road, on getting to the bad portion it will almost fall and that has been disturbing us.

That is why we resolved to work on the road starting from the junction with Onitsha Main market. You can see we have spread the stones for other materials to follow. Although it is palliative work we are doing on the road, our Governor has promised us that he will fix the road and others for us."

The chairman expressed regrets that some politicians have gone to the social media saying they were the ones working on the road and warned
them to desist from such utterances.

"You don't play politics with the road we are doing for the interest of our customers and ourselves.

He said he was surprised when somebody called him on phone and was telling him that some people posted on the social media that they were the ones fixing the marine road. They should desist in their own interest. We
resolved at our meeting to do palliative work until government comes to do the main work as promised"

Government can't do the whole thing, we can't be waiting for government all the time. The Governor provided us with '#20millionand we choose our project', and we used it to rehabilitate the slaughter
road, we are waiting for the governor to give them another #20million for the second phase"

He also said that "we need fire fighting vehicle to be installed in the market, as one has been installed at the main market by the Governor"

The chairman who said he inherited litigations on assumption of office, called for peaceful settlement of the case pending in court over ownership of the market, he concluded.
Email Post