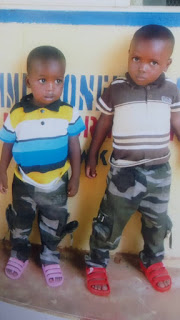 The Suspects were arrested with two kids all males whose age ranges between 2 and 4 years respectively.

The suspects could not give satisfactory explanation about the children nor where they got them.

The PPRO SP Haruna Mohammed said the Case is under investigation after which suspects would be charged to court for prosecution.

Consequently, it was gathered that the Commissioner of Police CP John B.Abang,fdc urged Parents whose children got missing and fall within the above age bracket to report at the PPRO office State Command headquarters Awka for proper identification and collect their children.