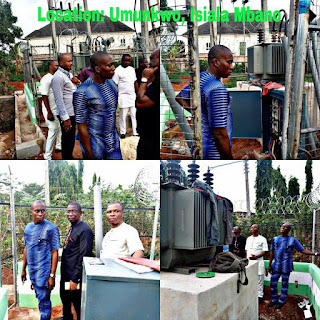 So much has been said about the leadership style of Hon. Obinna Onwubuariri, a young chap notable for his pragmatic leadership influence, unassuming to many, yet diatribed by some. His influence is likened to what Rosalyn Carter opined that a leader takes people where they want to go, but a great leader takes people where they don’t necessarily want to go but ought to be. From in-depth research and reasonable tallying of facts and figures, it was deduced abinitio that the biggest problem rocking the boat of most rural communities in Okigwe North Federal Constituency is the lack of power/energy/electrification to carry about their respective businesses.

To eradicate this plague of darkness which primarily was amongst the campaign promises of Hon. Obinna Kingsley Onwubuariri during his first sojourn at the National Assembly, facts available shows that he did justice to those campaign promises. In line with actualizing the connection of Okigwe north to the national grid, Hon Obinna started the massive rural electrification in many communities that has not seen Electricity prior to his administration. 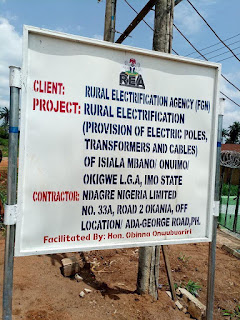 One of the benefiting communities is UMUEKPERE COMMUNITY in Umunkwo autonomous community, in Mbama clan of Isiala mbano LGA, Imo state. This particular village was dubbed the capital of hell due to the increasing darkness that sweeps the village when night comes. But today, the story has changed and that community sings to high heavens because of robust representation they felt.

The story remains singular in Onuimo LGA, as the wind of rural electrification ably facilitated and powered by the robust-ful representation of the youthful lawmaker flows through. Ndikpa Ajabo, Ofeahia and so many other communities are beneficiaries of the democratic dividends from the lawmaker. To feather the cap of his incessant development in Onuimo, the lawmaker also energized the substations located at Onuimo.

Like the Igbo proverb that says “when the spoils of a kill is shared appropriately, hate and violence gets relegated”, so has Okigwe LGA also benefited from the dividends of Hon. Obinna’s representation. Ogii and its environs are testament to this fact, as the village is connected to the National grid.

Okigwe LGA are also major beneficiaries of the lawmakers legislative inputs through his motion calling on the federal government to speedily complete and connect to national grid, the 134 KVA Power plant at Okigwe, Imo state. Before his era, 30% work was done, but the lawmaker has since his watch ensured that 95% of the work had been done and soonest, the issues of electrical woes will be a thing of the past in Okigwe north. History therefore beckons on us to do just with our votes, it is either we tow the path of experience or we plunge our destinies into perdition with inexperience.
Email Post