Onwubuariri; taking Continuity to another level 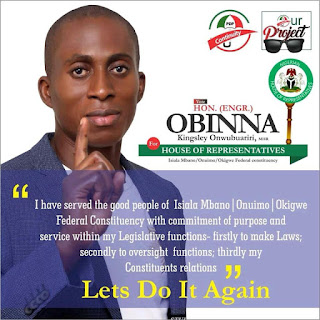 Governance and legislation are said to be a process, where the fortunes of the masses are entrusted in the hands of an elected few to drive the course of development and to pilot the affairs of nations, states, constituencies as well as local government areas for a period of time. If governance is a process, then the process is supposed to be marked with “continuity” at all level.

Unfortunately, over the years Nigeria has been bedeviled with neglect of projects by previous administrations at all levels. This trend of initiation and reinitiating projects has resulted in littering of fragmentary projects in states, federal constituencies and local governments “the hallmark of democratic dividends” since the resurfacing of democracy in 1999 to the Nigerian political sphere. Hence, democracy which is thought to be a system of governance that leads to social equity has become the machinery for not just disparity but planting seeds of discord and clannish repugnance.

Hon. Obinna Kingsley Onwubuariri on assumption of office in 2015 inherited myriads of incomplete federal projects from his predecessors, with the paucity of funds that greeted the appropriated funds from the yearly budgets and from inception and the recession that clout the country, one would have thought the norm of project desertion will be the order of the day, however, Hon. Obinna Kingsley Onwubuariri diligently concentrated on not just continuing inherited projects but guaranteeing the completion of all abandoned projects as well as initiating new ones. He fired from all embers to ensure that projects like the Ezinnachi silo project is sweltering unto completion, same as Okigwe Electric Power plant, Reintegration of abandoned properties to good use and lots of ongoing and completed federal projects abandoned in the time past.

Hon. Obinna appreciating the support and good will he enjoyed from the masses during and after his election focused on enacting laws that can directly affect both his constituents and Nigerians at large in a positive way. As of the last count, there were numerous bills structured to uplift our lives and better our humanity, added to his 13 motions that addressed numerous lingering National problems like the emergency toll free line of NCC to help Nigerians in distress, Nigeria’s urgent deal with South Africa to end xenophobia attack’s etc. One cannot but appreciate the fact that his steady town-hall meetings with constituents and its undulation effect has given the constituents of Okigwe north a face lift.

In order to put Okigwe North on track and to set the pace for industrial revolution, Hon. Obinna has supplied transformers to needy villages where its need to help cut cost of small scale production in Okigwe North federal constituency can’t be over-boarded. Hon. Obinna knowing well the effect of lack of water in Okigwe North federal constituency, decided to end the age long stagnation by lack of portable drinking and cooking water by digging up 30 boreholes across every political ward through his “PET” project for his constituents as a reward for the massive love he enjoys from his constituents.

It can be rightly said that Hon. Obinna knows the need for economic growth and youth inclusiveness in democratic processes and the effect such will have on the generality of the masses hence he took out time to focus on areas that positively reflects on the wellbeing of the people no wonder his support for the activities of youths across Nigeria. For a record time, he has organized football competitions for over a decade where talents were discovered, his working staff isn’t left out in the youth inclusiveness to power. Several youths have been empowered with skills and startup funds for various skilled, semi skilled and unskilled projects they participated in.

It can thus be said that Obinna’s Love for Okigwe north on one hand is the reason he deemed it fit to complete inherited projects as well as providing new ones that is uplifting the lives of constituents, one can also opine that his experience and exposure at the green chambers will make him an eagle in representation in the 9th assembly, as well as a ranking member. Whatever be the case, the hard truth is that the era of littering uncompleted projects in Okigwe North has come to an end under the watchful eyes of Hon. Obinna Kingsley Onwubuariri and continuity of these goodies should be on the lip of every Okigwe north son and daughter.