Anambra Police Command beefs up security ahead of Christmas 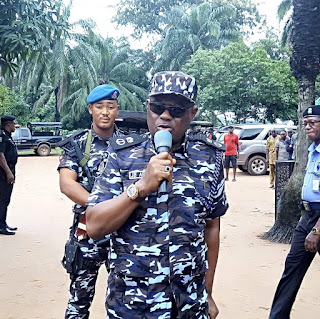 ....... As CP direct all Area Commanders, DPOS  to intensify Raids on black Spots.

This was made known in a press release, made available to Nigerian Notch, today in Awka, the state capital, by the Police Public Relations Officer, SP Haruna Mohammed.

In the release, he said "In order to enhance safe and secure environment for all "Ndi Anambra" and residents alike, especially during this festive period  and to ensure a peaceful Christmas/ new year celebrations in the State,the Commissioner of Police CP John  B.Abang,fdc has directed all Area Commanders,DPOS ,PMF and other striking units in the State to intensify raids on black spots and criminal hideouts; sustain the ongoing stop and search/ tactical operation duties and night patrols in order to deny miscreants and criminal elements the opportunity to operate within the State throughout the festive season"


He stressed that the CP also directed the Department of Operations to embark on Statewide visiting rounds to observe levels of compliance to his directives as well as strategies emplaced by Area Commanders, DPOs,Operations Kpochakpu II, Unit heads in their Areas of responsibilities.

Consequently, it worthy to note that all officers in the Command are also placed on red alert  at their respective duty posts and directed to respond promptly to any situation or distress from members of the Public.

The Commissioner of Police, however, warned Police personnel including PMF /SPU attached to VIPs visiting the State during the yuletide period to adhere strictly to the rules guiding use of firearms as contained in the revised Force order  237 and also refrain from unauthorized sporadic shootings on air,noting that any officer found violating such order would be dealt with in accordance with the laid down procedure.

The release made it known that the use of Knock-outs,Fire crackers and other forms of fireworks in the State also constitute a serious security risk as it is capable of misleading the Police  and other Security Agencies on apparent danger of gunshots as well as engender fear in the minds of the peace loving citizens. In view of this, Parents and Guardians are strongly advised to warn their Children and wards from purchasing and using knockouts as the law governing the sales, purchase and use of Fireworks is still in Force, as it remains banned.

Concluding, the Commissioner of Police equally appreciated the cooperation of the citizens in the state for availing the Command with useful information that has helped in promoting safety and Security in the State. He further reassured the Public of adequate protection and urged them to report any suspicious persons or movements to the nearest Police Station or call police emergency number 07039194332 for prompt response.
Email Post