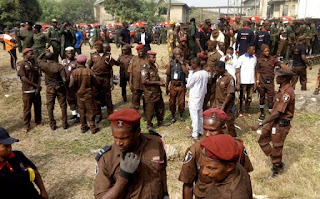 The security outfit tagged  “Operation Amotekun” was recently launched by states of southwestern Nigeria to help in providing security for their citizens. However, the Attorney-General of the federation, Abubakar Malami, SAN, has declared the outfit as illegal because, according to him, “security remains the exclusive preserve of the Federal Government”. In the first place, it does not lie within the province of the attorney general or indeed the President to declare Amotekun illegal as that can only be done through a duly constituted court of law.

This is because the Constitution recognises Nigeria as a federation and has set out the powers of the federating states where disagreements and conflicts are to be settled through the judicial arm of government. Secondly, under section 4(2) of the Constitution of the Federal Republic of Nigeria, 1999, it is only the National Assembly that has the power to make laws for the peace, order and good government of the federation or any part thereof with respect to any matter included in the Exclusive Legislative List. Item 45 of the Exclusive Legislative List in the Second Schedule, Part I to the Constitution, lists out “Police and other security services established by law” within the excusive legislative competence of the National Assembly, however, by the combination of sections 5(2) and 176(2) of the Constitution, the governor of a state is the chief executive of that state with powers vested in him to be exercised by him directly or through others including officers in the public service of the state.

It is now beyond argument that as the chief executive, the governor is also the chief security officer of the state, hence, is enjoined to do everything possible to maintain peace and order and to secure the lives of citizens and residents of the state. To all intents and purposes, Amotekun does not purport to be a police outfit within the meaning of that word in the Constitution and is not “…government security services established by law” as “law” in this context, in my opinion, means law as legislated by the legislature. But there is nothing like that here as all the governors have done is to set up a vigilante outfit in each of their states in aid of law and order just like most residents associations have done in residential estates and the like in virtually all the states of the federation and Abuja. If the Federal government is not happy about it, it should approach the courts and put it to the test.

This would be interesting because all the government and private vigilante outfits in this country will have to be scrapped if the action is successful. Going away from strict law, does it lie in the mouth of the Federal Government to say that Amotekun is illegal when similar vigilante outfits have been reportedly set up and in operation on civil duties in other states especially in the northern part of the country? Definitely not because the Federal Government is the government over the whole of Nigeria and not just a part.