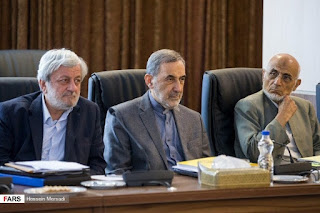 A member of a council advising Iran’s supreme leader has died after falling sick from coronavirus. He has become the first top official to succumb to the disease which is affecting members of the Islamic Republic’s leadership, which has the highest death toll in the world outside China. Expediency Council member Seyyed Mohammad Mirmohammadi died aged 71 at a hospital in Tehran, according to state radio. As well as acting as advisers, the council also settles disputes between Supreme Leader Ayatollah Ali Khamenei and parliament. Also among the country’s infected officials is Iraj Harirchi, head of an Iranian government task force on the coronavirus who tried to downplay the virus before falling ill. Other high profile patients include Vice President for women and family affairs Masoumeh Ebtekar, better known as ‘Sister Mary’.

The English-speaking spokeswoman for the students who seized the U.S. Embassy in Tehran in 1979 and sparked the 444-day hostage crisis. Iran has reported 978 confirmed cases of the new coronavirus strain named Covid-19 and 54 associated deaths. Across the Middle East, there are over 1,150 cases of the airborne bug, the majority of which are linked back to Iran. Experts worry the disease’s mortality rate in Iran (5.5%) is much higher than in other countries, suggesting the number of infections may be much higher than current figures show. Health workers in the country reported that 210 people had died from the illness as of Saturday, five times more than government figures claimed.

In a bid to stem the spread, Iran’s Foreign ministry held an online-only news conference today in which spokesman Abbas Mousavi dismissed an offer of help by US Secretary of State Mike Pompeo. Tensions between the two countries have been at their highest since the 1979 Islamic Revolution after an American drone strike in Baghdad killed top Iranian general Qasem Soleimani.

This provoked an Iranian ballistic missile attack against US forces at a base in Iraq. At today’s conference, Mousavi said: ‘We neither count on such help nor are we ready to accept verbal help.’ He said Iran has always been ‘suspicious’ about America’s intentions and accused the US government of trying to weaken the nation’s spirits. Meanwhile, the British Embassy has begun evacuations over the virus. A spokesperson for the UK’s Foreign Office said: ‘Essential staff needed to continue critical work will remain. ‘In the event that the situation deteriorates further, the ability of the British Embassy to provide assistance to British nationals from within Iran may be limited.’ While Iran has closed schools and universities to contain the spread of the virus, major Shiite Islam shrines have remained open despite civilian authorities demanding they be closed. The virus has taken hold of the holy cities of Mashhad and Qom, where Shiites often show their faith by touching and kissing the shrines, which authorities have been cleaning with disinfectant.