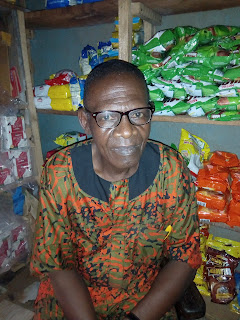 It is heart warming to note, that the stay at home directive by the state government to markets in Anambra state is yielding the desired results, as market leaders have took upon themselves to ensure that their members compiled 100%

When our correspondent visited Agboedo Market in Nnewi, the Caretaker Chairman, Comrade Joe Enuma was handy. He was indeed thankful to the state government for ensuring that the health of its citizens remained paramount, because health is wealth.


Comrade Enuma, commended the measures put in place by   Chief Willie Obiano towards combating the covid19 scourge in Anambra state, saying that closing of markets is one of them, which is meant to avoid the risk of spreading the virus.

He thanked the governor for proactive measures put in place by the state government, which include the closing of all land borders,the setting up of a covid19 response committee headed by the governor and the delivery of first Batch of rice, which is for the Elderly in Anambra, which he said showed that the governor is a kind man.

He was happy that the governor, has kept his promise of distributing rice for elderly people, and called on people involved to ensure that the rice reached those it was meant for in the state, to help ensure strict compliance of the stay at home directive by the state government.

He said that on there own as traders in the market, he has taught his members the need to keep clean at all times, through the washing of hands, wearing of face mask, and social distancing as a way of ensuring that they did not contact the virus.

He was however thankful that traders in Agboedo Market Nnewi, who are not selling food and essential commodities obeyed the directives of the governor, and in line with the directive, observed 100% strict compliance. He stressed that government's directive to stay safe and healthy until the scourge is contained by health professionals, was in the best interest of the traders no matter the immediate hardship.

He called on the people of Anambra state to continue supporting the APGA led government in the state, towards delivering the dividends of democracy to them. He also asked the traders to report to any case of dry cough, high fever and difficulty in breathing which are the signs of this deadly virus to the isolation centre in Nnewi at NAUTH.
Email Post