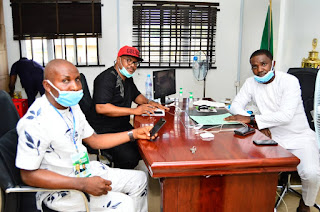 The special assistant to the Executive Governor of Enugu state, on Special Duties, Prince Emma Efoke has visited the Executive Chairman of Udi local government council, Hon. Ifeanyi Pascal Agu to ascertain progress, on the distribution of covid 19 palliatives to the people of UDI LGA, as a result of the lockdown, by Enugu state government based on the advise by NCDC.

Hon. Ifeanyi Agu, used the visit of the special assistant to inform the people of Udi LGA of his post covid 19 plans to reintegrate the people back into the economy, because of the heavy toll, the corona virus pandemic has left the world in.

The Chairman stressed that the distribution of palliatives in UDI LGA, is to support the candid effort's of His Excellency, Governor Ifeanyi Ugwuanyi on the Palliative Scheme, his government instituted for Ndi Enugu, towards alleviating the difficulties associated with the COVID-19 lockdown, and also way of supporting the needy within and after this trying period.

Our correspondent, while interacting with the Executive Chairman of UDI LGA, Hon. Ifeanyi Agu at the instance of the Council Secretary, Hon. Obinna Ezeano,  confirmed that the council under his leadership has achieved enormous progress in the distributions of relieve materials to the  indigent and vulnerable in the LGA, towards supporting Governor Ifeanyi Ugwuanyi's effort in providing palliatives for the people.

According to the Executive Chairman of UDI LGA, Hon. Ifeanyi Agu, he stated that his government just completed the second phase of distributing palliatives to the people and said that, plans are already in place to start the distribution of the third phase of the palliatives.


He however stated, that in the first and second phase of the palliatives distribution, a total of 80 families across the 38 communities of udi LGA were supported with relief materials.

In his post covid-19 initiative, Hon. Ifeanyi Agu stated that his government has already put in place a framework for the POST COVID-19 with special emphasis on Agriculture/Farming. He said a scheme will soon be inaugurated, which will be called the emergency response relief fund ((ERRF)

The Chairman averred that the initiative became imperative because, alot of people have spent their business capital, as farmers have also eaten their planting seeds such as seed yam, maize etc, as a result of the hardship/hunger caused by the Corona virus pandemic. He said that, the scheme shall support UDI business men/women and farmers to find their feet again, which will also help them set up other business ventures in the LGA that would create job opportunities and food for the people.

The chairman stated that the scheme shall be Funded by 1% of every monthly Allocation and self-will donations from other individuals and groups. He however stressed that a proper account and running of the scheme shall be kept, and promised to ensure that the whole process is Transparent.

In his keynote address, the Special Assistant to Chief Ifeanyi Ugwuanyi, thanked the LGA Chairman for his proactive measures, that has kept the people happy, stressing that government and governance is about the people. He commended Hon. Ifeanyi Agu for his giant strides in doing what he is doing for the people. He therefore tasked the people of UDI LGA to continue in their support of the chairman and the Governor of Enugu state, to ensure that everyone comes out of the pandemic in one piece.

In the first phase of the palliatives, 30 families were supported in the 38 communities of UDI LGA, with the following items, per family
a) A painter of Rice
b) A painter of Garri
c) A painter of Beans
d) Half Carton of Indomie
e) A sachet of salt
f) A 400ml bottle of Sanitizer
g) Detergent
h) Drugs.


In the Second phase of the palliative, 50 families across the 38 communities of UDI LGA benefitted also per family as they also got,
a) 10kg bag of Rice
b) 2 Tubers of yam
c) 5 Bulbs of Onions
d) A sachet of crayfish
e) 400ml bottle of Sanitizer
f) Drugs

It is also heart warming to note, that the Local government council lead by the Executive Chairman, Hon. Ifeanyi Agu also extended the palliative measures to the none indigenes living in Udi LGA, as the following items were presented to them:
100 tubers of yam, 50 (10kg) bags of Rice, Half bag of Onions and 50 bottles of Sanitizer.


The Hausa community residing in Udi LGA were not left out, as they also got palliatives as follows:
50 (10kg) bags of Rice, 5O tubers of yam and 50 bottles of Sanitizer.

The palliatives was also extended to persons in the LGA living with Disabilities. The total number present at the distribution were 274 persons and each of them were given the followings items:
2 Tubers of Yam, A bag of 10kg Rice, 4 sachets of Indomie, 4 bulbs of Onion and a bottle of Sanitizer.

Udi LGA under the leadership of Hon. Ifeanyi Agu also gave 100 bags of (10kg) rice to UDI LGA women in support of the First Lady's Palliatives, distributed to UDI Women, which came from the Wife of Enugu State Governor, Mrs. Monica Ugochi Ugwuanyi, through her pet project, Ugo’s Touch of Life Foundation (U-TOLF), in conjunction with Unilever Nigeria Limited, that donated relief materials to women and the less privileged in Udi Local Government Area, to help contain and cushion the effect of COVID-19 lockdown. The items include Close Up toothpaste, Life Buoy soap, Sunlight detergent, Omo, Lux, Pears powder, among others.
Email Post