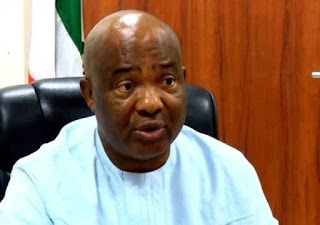 The Imo State government has busted a syndicate running the Imo Rubber Estate which has deprived the state of revenue for over 20 years.

It vowed to recover the estate, the biggest in South East Nigeria from these economic saboteurs.

The Imo Rubber Estate is located on a large landmass in Emeabiam Community in Owerri West LGA of Imo State.

The Estate had been taken over by some unscrupulous persons, who hijacked proceeds of the estate for personal use to the detriment of successive State governments.

Recently, a gang that specialized in the stealing of rubber lumps at the estate were arrested and detained by the Police at the Nekede/Ihiagwa Police Station, with a lorry loaded with rubber logs.

Conducting journalists round the rubber estate, Imo State Commissioner of Commerce and Industry, Hon. Kingsley Ononuju and Special Adviser to the Governor, Gibson Njemanze (Oyiga) expressed dismay on how the area has been run by some  persons without making any returns to the State government.

The Commissioner said the state government will henceforth take proactive steps to retrieve the rubber estate at a time the state is in dire need of funds to boost development.

He said “His Excellency, the Governor of Imo State, had directed that we find out the status of state owned industries, including Imo Rubber Estate, Emeabiam which is one of the biggest rubber plantations in the South East.

He said the state government is surprised why such a huge estate are not yielding revenue to the State and why it is in the hands of economic saboteurs.

He continued “We are informed that these saboteurs steal the logs from here and export them to China. This is unacceptable.  There will be detailed investigation on the matter and we will find out those behind it.This is a major plantation that should be yielding both foreign and local currencies for Imo State

“We will report our findings to the Governor and possibly set up a panel of Inquiry. It is sad that a time the state government needs money; some people are milking the state dry by pocketing what is due to the state from the rubber estate.

In his remarks, the Special Adviser to the Governor, Gibson Njemanze (Oyiga) also frowned at the exploitation of Imo Rubber estate, Emeabiam  which he said could serve as a huge income earner for Imo State.

He revealed that it is regrettable that while the state government is striving to raise funds for the development of the state at a time the price of oil is low, the Imo Rubber plantation, which was conceptualized by the Late M.I Okpara of the defunct East Central State, has been converted for personal gain by some few persons, who are sabotaging the state.

Some of the workers at the estate spoke to newsmen on the condition of the estate.

Mr. Nwokedi Mac Ben, who claimed to be Assistant Director of Operations at the estate, said the rubber estate has been in precarious condition for 20 years. He revealed that one Fedinand Akor, is the Director of Operations at the estate, assisted by one  Charles Udemba, lamenting that there have been no job security for workers at the plantation.
Email Post