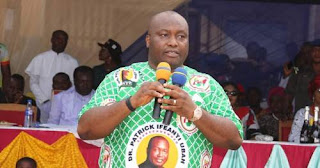 As Nigeria marks its 60th Independence anniversary, the Senator representing Anambra South and National Leader of the Young Progressives Party (YPP), Dr Patrick Ifeanyi Ubah has urged Nigerians to remain disciplined and focused as the future of the country is certainly brighter than imagined. The Senator made this known in an independence day message he personally signed on Thursday.

According to Senator Ubah, Nigerians must be united not only by a common purpose, but also by common values of love, honour, morality, progress, courage and patriotism.

Congratulating Nigerians on the celebration, the YPP national leader said that despite numerous challenges, Nigeria has continued to achieve enviable successes on varied fronts. He further urged the government and good people of the country to continually build and strengthen institutions of accountability, justice and fair play.

The Anambra South Senator further saluted the nation’s founding fathers for their monumental sacrifices in actualizing the prolonged struggle for freedom. He also called for the utilization of the nation’s diversity as a source of strength which will be harnessed and forged into a potent tool for the realization of national interests especially at this trying and challenging time of Covid-19 pandemic.

He also used the opportunity to pay a special heartfelt tribute to frontline health workers who have demonstrated exemplary commitment and extraordinary courage to serve and save the people, and urged Nigeria and Nigerians to aggregate their strength and be united in efforts to rescue the nation from the stranglehold of the global pandemic. He further called on Nigerians to forge a common front to defend the nation’s hard earned freedom by being purposeful, focused and disciplined and urged all to remain committed towards upholding integrity of the country.