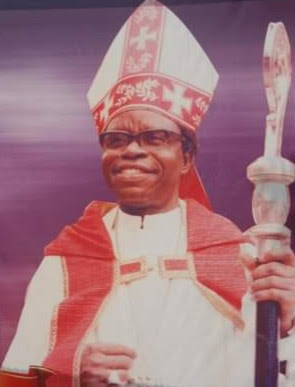 Late Archbishop Johnathan Onyemelukwe, a renowned clergyman of the Anglican communion, who led the church in various positions from 1974 to 2000, establishing several educational institutions and branches of the church has been immortalized with an estate named in his honoured.

Mr Enuma Okoli, promoter of Onyemelukwe Glory Estate revealed this to journalists in Anambra in a press conference recently.

Okoli who is also a ranking member of the Anglican Communion said, "the need to immortalise Archbishop Onyemelukwe arose from his work in the Anglican Communion, during his time as Bishop of the diocese on the Niger. The estate which has been named after this powerful Man of God is situated in Umuegem, Ufuma, Orumba North LGA, and we want to recreate Victoria Island, Lagos there.

"The estate is targeted to be one of the most decent and modern estates in the southeast of the Niger and we invite men and women of honour and dignity to apply for some plots. A total of 183 plots are mapped out for the estate. A plot of 100 by 50 feet is #640,000.

"The estate is divided into 2 broad sections: section A for Duplexes and section B for Bungalows.

The estate is promoted by Calvary Legacy Homes Limited Lagos.

Okoli said the estate is an ideal place for wealthy Anambra people who want to bring their wealth home, and who desire to live in a very serene, secure and conducive environment.

He said the choice of Ufuma as the location was because, "Ufuma is currently one of the fastest growing rural communities in Igboland. With the influx of visitors daily due to the hosting of a branch of the Federal Polytechnic, Ufuma.

Next is the proximity (about 7minutes drive) to Oko town, the main headquarters of the ever growing Federal Polythenic.

"The town is just about  5minutes drive to another institution: The College of Education (Technical) Umunze. With all these the town  is developing in leaps and bounds.

In fact  it can  be said that Ufuma is one of the best promising  well positioned rural areas in Anambra State, development wise," Okoli said.

He described Onyemelukwe as one who it is difficult to read his history without getting excited. "We want our people to learn a few things from his life, especially to recognize that you can use whatever position you have to make a difference, and we hope that his lifestyle will rob off on the occupants of the Onyemelukwe Glory Estate," he said.

Archbishop Onyemelukwe was the Anglican Bishop on the Niger Diocese between 1974 and 2000; He was later elevated to the post of Archbishop overseeing the whole of Southeast Anglican churches. He died in 2011 and was buried in October of the same year. He hailed from Nanka in Orumba North LGA of Anambra State.