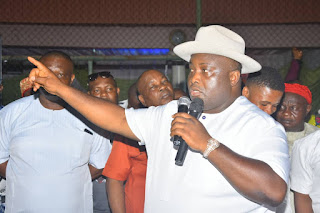 As we celebrate the Africa Industrialisation day today being  Nov 20th 2020, there is no gain saying the fact, that Industrial development is of critical importance, for sustained and inclusive economic growth in African countries, which Nigeria is an integral part of.     Industrial growth has its tremendous potentials towards enhancing productivity, increasing  capabilities of the workforce, as well as generating mass  employment, through the introduction of new equipment, new thinking  and new techniques.
Senator Dr Patrick Ifeanyi Ubah in this direction has shown in recent times that indeed, he truly has the interest of Ndi Anambra at heart, by the many infrastructural developments he already has in his kitty.

In barely two years of taking up the mantle of responsibility by virtue of a landslide election into the red chambers, the Chief proponent of #GosimKamfunanya in Anambra South set about delivering the goods in a manner that showcased class and capacity .

Today, in addition to turning the entire South Senatorial District into one big construction arena, he has gone outside the box to score even more wins for Ndi Anambra by rallying its worthy sons and daughters into joining hands with him to build well equipped medical and Isolation Centres at NAUTH Nnewi already functioning at full capacity and another already standing gigantic structure awaiting commisioning which will serve as fully equipped hospital in  Nnamdi Azikiwe University Awka and others too coming up in Onitsha and Aguata.

The ongoing road interventions in the entire South Senatorial District which is geared towards making the roads in Anambra South motorable for the Yuletide, is also an attestation to the fact that the workaholic senator is leaving no stone unturned to ensure that his people, Ndi Anambra gets the best.

With the introduction of the industrial park, which will birth soon, courtesy of Anambra Progressives, the Nnewi born Senator, is setting a stage for vast empowerment and employment of youths in Anambra state.

Despite the impact of COVID-19 in Nigeria, which has slowed down businesses in the country, the industrial park will be a welcome development for Ndi Anambra, who are mostly industrious and commerce driven. We should however recall, that Africa despite being the second most-populated continent in the world with over (1.2 billion people), Africa represented only 1.4 % of world Manufacturing value added in the first quarter of 2020.

We want to use today, to draw a pointer to the need for a paradigm shift from over dependence in oil and  gas resources, as other states gradually create  alternative routes for growth through industry and commerce which Senator Dr Patrick Ifeanyi Ubah has totally bought into.

While the COVID-19 pandemic has evolved  slowly in Sub-Saharan Africa than in other regions, it has exerted a sizable toll on economic activity with a growth rate expected to fall to -3.3% by end of  2020, pushing the region into its first recession in 25 years. The major reason, why government and political leaders should think in the direction of industry and industrial growth. All thanks to Senator Dr Patrick Ifeanyi Ubah for thinking in that direction and also walking the talk in making it a reality for Ndi Anambra

The combination of domestic lockdowns and greatly reduced external demands from the global recession will weigh heavily on the industrial sector in the coming months and years.

Industrialization of economies with strong linkages to domestic industries, will however help African countries achieve high economic growth rates, diversify their economies and reduce their exposure to external shocks. This will substantially contribute to poverty eradication through employment and wealth creation.

Within the framework of the Second Industrial Development Decade for Africa (1991-2000), the United Nations General Assembly, in 1989, proclaimed 20th November “Africa Industrialization Day” (A/RES/44/237). Since then, the United Nations System has held events on that day throughout the world to raise awareness about the importance of Africa’s industrialization and the challenges faced by the continent, this Senator Dr Patrick Ifeanyi Ubah has already keyed into.

Many keep asking why it should be Senator Dr Patrick Ifeanyi Ubah in 2021 and this is one of the precursors to the fact, that he is intellectually ahead and business oriented to take Anambra away from the doldrums of ineptitude and crass ignorance of what governance should be.

As we mark this day, there is need for us to appreciate the fellow youth who has carved out a road map, to economic emancipation through the building of sustainable and viable structures that will re establish Anambra as the light of the Nation.