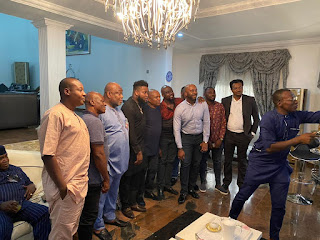 The Abuja, Aso-Villa residence of the Chief Whip of the 9th Senate, Senator Orji Uzor Kalu on Saturday played host to the Chieftain and prominent founding member of the ruling All Progressive Congress (APC), Senator Osita Izunaso.

The host Senator Orji Uzor Kalu revealed that the reason for the special reception in honour of Senator Osita was to celebrate his one year of "returning" to the party.

The reception had the presence of other political dignitaries who gathered at the residence of Senator Kalu to mark the anniversary of Senator Osita Izunaso's return to the APC.

Speaking in the presence of the guests Senator Kalu narrated how Sen. Osita persuaded  him to join the APC back in 2016. He described Senator Osita as a noble politician and also beckoned him to put behind him all disagreements he had with the party.

On how his Mother Mrs. Eunice Kalu convinced him to join APC Kalu said; "When my Mother presented my two brothers to President Buhari he jokingly asked 'where is the third one'? So in the 16th of November 2016 I had series of meetings with President Buhari and he promised to revamp the Enugu-Express way which he has fulfilled.

The President also kept another Promise to me because Abia North Senatorial district gave President Buhari 68 percent votes , and APC in Abia North defeated the Presidential candidate of the PDP hands down. The people in Abia-North voted strictly based on party and all other candidates who contested on our platform in our zone had an easy ride.

Apart from my mother Senator Izunaso visited me several times to convince me to join the APC , this is why I am celebrating him today.

Responding Senator Osita branded Senator Kalu as a true "leader" , he expressed his gratitude for reception at his residence. Senator Osita in his speech mentioned that he never left the APC but rather stepped aside to resolve certain issues and later returned.

"The truth is I never left the APC , I only stepped aside for a short while to sort out some few issues and I returned after the issues were resolved. I returned in November 10th 2019 and I am happy that his excellency Senator Kalu is reminding me . The All Progressives Congress(APC) is a family party , it is a party that we started from scratch we are the founding members of APC, we are ones that built the party from the very first day" said Senator Osita

He continued " We wrote the party's constitution and gave it's name we also created it's logo and slogan . In fact we created everything about the APC for the very beginning. The APC remains my home that I am well pleased.

Senator Osita also made is known that he had forgiven those who frustrated him in the party . In his words " even the people that tried to annoy us and make us step aside we have also forgiven them , we are back to continue our efforts in developing and nurturing this party. Our intention is to make this party the biggest in Africa and one that we can be proud of.