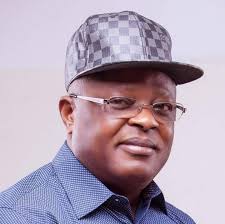 Ebonyi state Governor Dave Umahi has officially joined the All Progressives Party (APC) from the Peoples Democratic Party. He confirmed his switch to the central ruling during his interaction with journalists in his office, at the new Government House, Abakaliki.

Umahi told Journalists that his reason for APC was to protest for injustice being done to the south east by PDP.

The governor also debunked rumor that he was living the Peoples Democratic Party (PDP) because of his demanded for the 2023 Presidential ticket of the country.

He further denied being  promised any special package in APC.

“However, I offered this movement as a protest to injustice being done to the south east by PDP. Since 1998, the south east people have supported PDP in all elections; at a time the five states in south east were all PDP. One of the founding members of PDP is from south, His Excellency Dr. Alex Ekwueme east; the late former Vice President. And so, it is absurd that since 1998 going to 2023 that southeast will never be considered to run for presidency under the ticket of the PDP, is very absurd and this is my position and it will continue to be my position, it has nothing to do with me.

“The point is very simple. In 2023, I would have been in PDP between 23 and 24 years and south east never really  supported APC the way they are supporting PDP and in that 2023, they  would have been 8 years in office but it would have been about 23 years going. So, I believe strongly that the will of God will come to play but I believe that APC is amenable to working with south east from  all indication, it’s amenable and I also believe that until justice and equity is implanted in this nation Nigeria, it is difficult for Nigeria to make progress.”

The governor further said he would be retiring  from politics in 2023, but  demanded for the next President of the country to come from South East region.

Umahi said that having been successful governor for two tenures and a successful business man, he would return to business where he also has calling.

Umahi said the South East has remained faithful to PDP, voted for its candidates, yet had not been considered fairly in Nigerian polity.

He said that if an Igbo man is President, he would naturally be protective of all sections of the country more so, because the Igbo have stake in all parts of Nigeria.