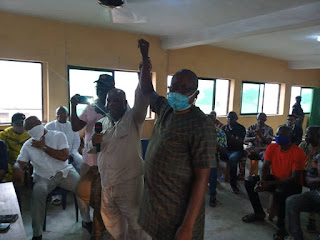 Nnewi North LGA Chapter of the PDP last Saturday, enjoyed peace once more as a new chairman through consensus emerged after a long battle on who takes over from the late Chairman who died last year.

Bringing peace to the PDP family in Nnewi was one of the first task by Chief Olisa Metuh, after he wa released from incarnation. Before his timely intervention, PDP Nnewi was also almost broke into two factions, but all thanks for intervention over the weekend. This he has done as a stakeholder of the PDP who is also from Nnewi North.

After a thorough meeting of PDP stakeholders in Nnewi,   Nonso Amachukwu was unanimously adopted to take charge of PDP Nnewi North pending when a congress is held, which will likely be after the guber election in the state

With, PDP unanimously resolving her leadership problem in Nnewi North, it is a clear indication that Chief Olisa Metu’s absence dealt a heavy blow to the fortunes of PDP in the state, before now.

The tact and wisdom used by Chief Olisa Metu to bring back peace in the PDP fold in Nnewi has once more proved his charisma and acceptability to the people.

In his reaction, while addressing party faithful,  the new PDP Chairman in Nnewi North, Prince Nono Amachukwu, thanked Chief Olisa Metu for hi sagacity and tact in handling the problem that occasioned the death of their former chairman. He stated however that he was not in the picture for the position, but was surprised when he was asked to answer the clarion call. He said, that he will do everything within his capacity to unite the party, especially now that they are in an election year.

He therefore thanked the deputy chairman who had held sway, and promised to run an open door policy where everyone will be carried along in the scheme of things, while promising leaders of the party especially Chief Olisa Metu of holding forth the torch that has been given to him to handle to ensure that PDP Nnewi North returned to winning ways.