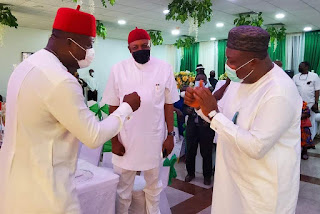 Valentine Ozigbo, the frontline Peoples Democratic Party (PDP) aspirant, for the 6th November Anambra State gubernatorial election, has advised on what he described as the "non-negotiable steps and factors" the party's stakeholders should take and consider, before throwing their weight behind a flagbearer.

Mr Ozigbo made the assertion on Tuesday, March 2, 2021, when he attended a stakeholder's meeting of the South-East PDP held at the Enugu State Government House.

Ozigbo, who is the immediate past President and Group CEO of Transcorp Plc, submitted that the party stakeholders should do everything legally possible to ensure a free and fair primary election. He also maintained that the ancillary activities leading up to the primary are just as important.

He called for the party to engage in broad consultations among the party leadership and other relevant stakeholders like the National Independent Electoral Commission, INEC, the Nigerian Police to ensure that the PDP has a hitch-free outing.

Mr Ozigbo also advised that the party's screening committee conducts a thorough background check of all aspirants,to ensure that the best candidate emerged.

"We must look at the personalities aspiring to be our flag bearers. Their character, track record, and antecedents should be of topmost consideration," he said.

Ozigbo'further stated that the "Reputational issues and the issue of zoning, which is an unwritten code in the gubernatorial election processes in Anambra, must also be considered.

"The truth is, once we elect a person who is inherently controversial in any form, post-primary unification becomes impossible. This is a default sowing of discord seed that bears the ultimate fruit of failure at the polls.

"We cannot afford controversies that will disunite and distract us from the main issues," he declared.

According to Ozigbo, for PDP to be victorious at the upcoming election, the party stakeholders and all concerned should be seeking to reach a consensus on who will be on the ballot in the November election.

"I want to emphasize the importance of reaching a consensus. It may sound impossible, but wisdom holds that 'once there is will, there will be a a way'," he said.

"If we see ourselves as brothers and sisters; if we fix our gaze on the bigger picture which is the ultimate goal; if we think less of personal interest and more of the overall interest of Ndi Anambra - nothing will be impossible for us.

"The fact is that if we must win the forthcoming election, the process, in the minimum, must be free and fair.

"Once we have a free and fair process, it becomes easier for the aspirants who lost out in the primary to support the winner. When this happens, nobody was a loser; rather, we would have a win-win situation for all.

"I wish to call on our leaders in Anambra State, namely Peter Obi, Linus Ukachukwu, Chris Uba, Olisa Metuh, and other Board of Trustee (BoT members), to present a united front and be on the same page as we march on to the November 6 election," Ozigbo said.

The prominent philanthropist thanked the Enugu State Governor, Ifeanyi Ugwuanyi, for convening the meeting. He commended the governor's "generosity and untiring push to ensure that PDP wins the governorship election in Anambra State".