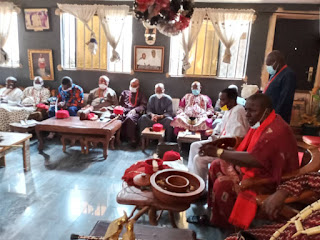 Recall that OPOCA, an apex political body in Orlu Zone has last week slammed a 48-hour ultimatum to Okorocha to apologise to Imo State Governor, Senator Hope Uzodinma, who is also a prominent son of Orlu Zone and Ndi Imo for "shamefully leading thugs and his domestic hoodlums to unseal a property known as Royal Spring Palm Estate located along Akachi Road, Owerri, purportedly owned by his wife that was hitherto sealed by the State Government following a gazetted White Paper emanating from a Judicial Panel of Inquiry". 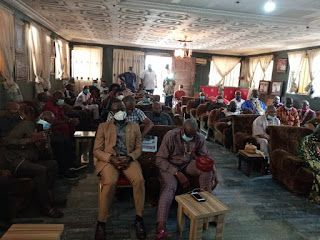 But, Okorocha, appears to have dismissed the ultimatum as he neither apologised to Gov. Uzodimma nor to Imo people within the 48-hours.

Arising from a consultative meeting between OPOCA led by its National President, Chief Barr. Rex Anunobi (Sokom), Orlu Zone Council of Elders led by Chief Bernard Anyanwu, the IMC Chairmen also led by Hon. Willie Okolieogwo, the Oru West Chairmen and Chairman Imo ALGON and Orlu Zone traditional rulers held at the Palace of Eze Emmanuel Okeke of Amaifeke Ancient Kingdom, Orlu LGA, the Chairman, Imo State Traditional Institution and Community Police Committee on Monday, the Orlu Zone stakeholders upon deliberations issued a 6-point Communique supporting unanimously the recall of the former governor over what they described as poor representation and causing an embarrassment to the State Government and the people of Orlu Zone.

The Communique which was endorsed by all the stakeholders in attendance reads:

1. That we have monitored and reviewed series of unprovoked utterances and activities of Senator Rochas Okorocha which no doubt are meant to distract our dear Governor, Senator Hope Uzodinma from cleaning up Imo from the mess his administration plunged the State.

2. That the ultimatum issued to Rochas Okorocha by OPOCA which is the apex political body in Orlu Zone, demanding that the former governor tenders an unreserved apology to Governor Hope Uzodimma and Ndi Imo over his recent embarrassing and lawless invasion of a property sealed by the State Government purportedly owned by his wife, is a right step in the right direction. The Orlu Zone Council of Traditional Rulers, Chairmen of the 12 Local Government Council Areas in Orlu Zone and Orlu Zone Elders  Council hereby adopt the position of OPOCA to commence without delay the recall of Senator Rochas Ethelbert Anayo Okorocha from the Senate of the Federal Republic of Nigeria.

3. That we commend and endorse every action taken by our dear Governor, Senator Hope Uzodimma, to recover for Ndi Imo all property and funds that were looted and diverted by Okorocha, his family members and cronies. And that we shall at no time condone or tolerate any ploy aimed at frustrating the "Recovery" drive of the Shared Prosperity Government of Senator Hope Uzodimma.

4. That we decry the failure of Senator Rochas Okorocha to effectively represent the people of Orlu Senatorial District. It is shameful and regrettable that Okorocha who is yet to brief his constituents including traditional rulers for over 19 months he has been in the Senate, is rather busy fighting just to protect his loot and property massively corruptly acquired within the 8 years he superitended over the affairs of Imo State as Governor. This unfortunate situation is a departure from  the quality representation we witnessed during the 8 years (2011-2019) our present Governor, Senator Hope Uzodinma, represented Orlu Senatorial  District before his election as Governor of Imo State.

5. That we hereby renew our earlier call to all sons and daughters of Orlu Zone both at home and in diaspora to support the Shared Prosperity Government of Senator Hope Uzodimma anchored on Reconstruction, Rehabilitation and Recovery (3-R) which has within a short period returned Imo State to the glorious path of development and good governance.

6. That we unequivocally pass an implicit Vote of Confidence on our dear Governor, His Excellency,  Senator Hope Uzodimma and his team for visionarily displaying competence in governance and selflessly embarking on people-oritented projects and programmes such as massive construction of quality roads across the three (3) Senatorial Zones, skill acquisition and empowerement for the youths and women, health care delivery services, repositioning the civil and public service sectors of the State for improved productivity among others".