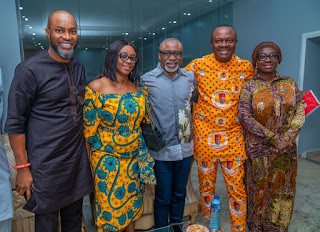 Valentine Ozigbo, the flag-bearer of the Peoples Democratic Party (PDP) in the 2021 Anambra governorship election, was in Abia State on Sunday, October 3, 2021, as the PDP National Campaign Council for the Anambra guber election held a brainstorming session to strategise ahead of the November polls.

Governor Okezie Ikpeazu, the Executive Governor of Abia State, who is the Chairman of the National Campaign Council, hosted the meeting at his Umuobiakwa Country Home in Obingwa Local Government Area of the State, where members of the sub-committees of the Council were announced.

Several PDP leaders attended the meeting, including Senator Eyinnaya Abaribe, the Minority Leader of the Nigerian Senate; Chief Osita Chidoka, a former Aviation Minister who serves as the Secretary of National Campaign Council; Sir Ude Okochukwu, the Deputy Governor of Abia State; Mrs Laurentia Mallam, a member of the PDP Board of Trustees, among others.

While addressing the gathering, Mr Ozigbo assured the National Campaign Council of the preparedness of the PDP in Anambra State to run a winning campaign.

Accompanied by his wife, Ojiugo Ozigbo, the multiple award-winning  global CEO gave reasons why the PDP stands out among other parties contesting the November election.

"I believe the PDP stands a great chance in the forthcoming election, and I feel so because of several reasons. We have accessed what Ndi Anambra have said about all the candidates, and the feedback we receive is that we stand tall above others," Ozigbo said.

"PDP also stands a chance because the APGA has failed the people of Anambra and APC is not on the ground. We are also the only major party that conducted a credible primary election.

"More importantly, we have a well-researched, modern, and realistic approach to solving Anambra's problems, and our message has been declared as the best by Ndi Anambra. We mean well for them, and we will set a new standard in governance.

"I can assure you that your efforts will not be in vain, and all of you will be proud of the fact that you are part of this project," Ozigbo declared.

In his address, Governor Ikpeazu affirmed that a win for the PDP in the Anambra election would mark a turning point in the country and spark the hope that a greater Nigeria would emerge again under the PDP.

Governor Ikpeazu also promised to mobilise PDP governors and other party faithful to ensure a peaceful election, urging Ndi Anambra to lead the charge in recovering the state for themselves and the PDP.

Chief Chidoka, who gave a short address, thanked Governor Ikpeazu for his hospitality, encouraging words and support so far. He reassured the gathering that Anambra was ready for victory is in our sights.

"All we need is the presence of more PDP governors and leaders in Anambra State. How we perform in November will set the tone for the events of 2023," Chidoka said.

Dr Alex Obiogbolu, the Director-General of the PDP State Governorship Campaign Organisation, thanked the National Campaign Council for their selfless efforts, assuring them that their efforts would be supported by the activities of the campaign council structures at the state, local government, and ward levels.

The Chairman of the PDP in Anambra State, Chief Ndubuisi Nwobu, who gave a brief remark, thanked Governor Ikpeazu and expressed readiness to ensure Anambra returns to PDP.

"This meeting is a great morale-booster. We are delighted with the enthusiasm of Governor Ikpeazu, and we assure him that Ndi Anambra will safeguard our votes.

"We urge you to galvanise other PDP governors to ensure that Anambra is given all the needed support. We need strategic thinking, resources and influence so we can be assured of victory," Chief Nwobu said.

Ozigbo's delegation to the meeting included Senator Uche Ekwunife, the Chairperson of the Anambra State PDP Campaign Council; Hon Obinna Chidoka, the lawmaker representing Idemili North and Idemili South at the Federal House of Representatives; and a host of party leaders and stakeholders.

Valentine Ozigbo is the immediate past President and Group CEO of Transcorp Plc. In March 2020, he stepped down from the prestigious position to dedicate himself to public service. Ozigbo's Ka Anambra Chawapu movement has triggered renewed hope in a renaissance in the fortunes of the southeastern state.