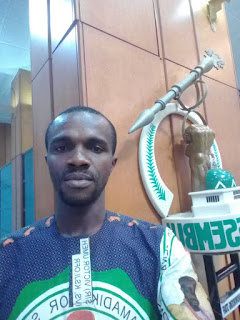 Comrade Obinna Okechukwu, the Chairman, new automobile Spare Parts association (NASPA) has taken stock of his achievements in the last one year of his tenure in office. In this interview with our correspondent, he highlighted his achievements and major challenges in the market.

Excerpts:
How have you faired in the last one year in office.
I thank God for the grace and mercy; the Lord has given to me, especially the wisdom to manage the affairs of NASPA market in Nnewi. It is not an easy feat, but God has been faithful. I want to also thank the traders in NASPA for the cooperation they have given to my administration, without which, it would have been a difficult task for me to run the market effectively.  I want to let the world know, that what people actually want in life is someone that will tell them the truth at all times. Truth is the bedrock of my administration, being reason, what I say in the morning, is what I will say in the afternoon and if you call me in the evening, I will tell you the same thing. My administration is anchored on truth and transparency.

What can you say are your achievements in the last one year?
Thank you for that question. I have at every point in time, made it known to anyone who cares to listen that the major reason I am serving as the NASPA chairman is to deliver service to the people. My mandate is to make sure that the market is clean, the gutters are cleared of refuse and the internal roads in the market are in good shape. All these I have done in the last one year, with dexterity and commitment. I have ensured that the park we have in NASPA is renovated and kept in good shape. I repaired and restored internal roads in the market, which before now where impassable, such as the roads in zone 6 and 7, zone 5 and 4, zone 2 and 3, zone 15 and 14, zone 14 and 13, and most importantly curtain line, which comprises of zone 17,18, 15, 21, 22 and fire service line with over 100 bags of sand and chippings. I have also initiated action to tar the road linking the market from Nwagbala, by Diamond Bank Plc, which will be concluded by the end of November this year.  I did all these without tasking anybody in the market for aid. I make bold to say that my achievements in the last one year, have surpassed the achievements of the many past Chairmen of NASPA, as the records are obvious, which can also be verified. It is only in the last one year, that nobody has complained of flooding or water entering their shops. A feat that has not happened in the last 10 years. You can also go round and ask traders in the market.
Sir, it was said that you diverted funds meant for government purse, how true is this??
That is not true my friend. People that feed you with that lie do not have a reputation to protect. I have one to protect, so I must tell you the true situation of things, as it stands in the market, because most of the speculations are mere fabrication, because I am doing a good job here in the market.  This is what happened. Anambra state government gave me authority letter to collect tax for the government for 2016/2017 fiscal year. It happened that the head of all market leaders in Nnewi, Chief Edwin Mouzuomu, called a meeting of all market leaders, which I attended with my secretary. In the meeting  Chief Edwin Mouzuomu asked us to print temporary receipts, which we will be using to collect revenue for government, pending when we get the original receipt from government. The receipt is what I am still using up till this moment. I collected N16M and paid in N10M to ensure that the funds were confirmed by the state government before we pay the balance of the N6M, because we had an issue of loss of funds, so I wanted to be very sure, that the N10 I paid was confirmed before paying in the balance, which the government of Anambra state appreciated.  I did not divert any funds, and won’t want to because, I don’t have need to take public funds, because I am contended with what I have. The true situation is gradually playing out; you will get to hear from DSS on the matter soon.
Why are some people asking for election in the market?
Those asking for election in the market are the people that are fighting the government; they are the same people who have insisted that they will not pay tax, because of the ban of Okada in Anambra state. They say they must stage a riot in the market, which I refused. They say I am not fighting the government, so therefore, I must be removed. I want to let them know, that leadership is not about fighting government but rather, it is about attracting the attention of government, which I am doing, on the issue of Okada ban in the state, which is gradually yielding results.
What is your watch word for traders in NASPA.
I want to thank them for the support they have given me in the last one year. Without their support, I don’t think, I would have been able to do any meaningful thing in the market. I urge them to remain steadfast as the best is yet to come. I also call on others who are fighting my administration to come and join hands to build the market, because we all own and live for NASPA. I also want to thank in a special way, Chief Dr Innocent Chukwuma( Ifediaso Nnewi) Iyom Bianca Ojukwu and RT Austin Emmanuel for the support they have given me in the last one year.
Email Post