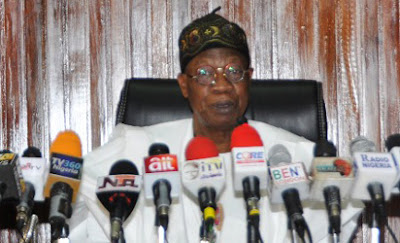 The Federal Government says it is engaging foreign media organisations, networks and think tanks to shape their opinions on the true position of things and correct the negative narratives about the country and President Muhammadu Buhari’s administration. The Minister of Information and Culture, Alhaji Lai Mohammed, disclosed this in London after an engagement with the Royal African Society, a body founded in 1990 to promote relations between the UK and Africa.

Specifically, the minister said that the engagement was to shape their minds and opinions on the true position of insurgency in the North East, farmers/herdsmen clash and the achievements recorded by the Buhari administration which were being downplayed. The News Agency of Nigeria (NAN) reports that the minister arrived in London on Sunday and delivered a lecture in Chatham House, the UK-based Royal Institute of International Affairs. He also interacted with foreign and Commonwealth Office officials, All Party Parliamentary Group and featured on Aljazeera television news hour. The minister also met with the largest global news agency, Reuters, New African and African Business Magazines and African Report. Mohammed said that the whole essence of the engagements was to correct the negative narratives about the country and place on the table the giant strides of the Buhari government. He added that “the whole idea of the trip is to engage foreign media organisations, networks and think tanks to actually explain the activities of government. “As you were aware, we have been to the UK twice and the U.S. on this kind of mission. “I think generally it has been quite fruitful because it offered us the platform and opportunity to explain to them what this government has achieved in the areas of security, fighting corruption and in revamping the economy. “It also gives us the opportunity to disabuse the minds of the people about the insecurity in the North-East and how the government has succeeded in returning normalcy in affected areas. “It offers us the opportunity to explain that the farmers/herdsmen clash is largely due to population explosion, climate change and criminality as against the naysayers’ position that it is ethnic or religious. Alhassan strips Taraba APC office, retrieves all donated furniture “Really, it has been quite helpful and we will continue with the engagements.” The minister said he was satisfied with the level of reception and understanding achieved during the visits. On the challenge of unemployment in the country raised during one of the meetings, Mohammed said “the administration had been trying to clean up the mess by past governments. “For 16 years, no attempt was made to invest on infrastructure, there was absolute corruption. “So, what you have today about unemployment is actually as a result of bad governance. “Even at that, we have made very positive giant strides. “In the history of Nigeria, no administration under any programme has employed half a million unemployed graduates as we have done through our N-POWER programme.” Mohammed said the administration had diversified the economy by repositioning agriculture to become the choice of many Nigerians. “We have been able to grow rice farmers from five million to 11 million, we have been able to cut down on importation of rice. “So, ours is a success story in the areas of agriculture and unemployment.” The minister stressed that the visit was not just about the 2019 general elections, rather, it was to present the facts and figures on Buhari’s achievements and true situation of security in the country. “Many of the organisations we met were surprised to hear that we have spent as much as 7.5 billion dollars in two years on infrastructure. “They were quite impressed to see that power generation jumped from 2,560 megawatts to 7000 megawatts.” The minister is scheduled for more engagements before returning to Nigeria.