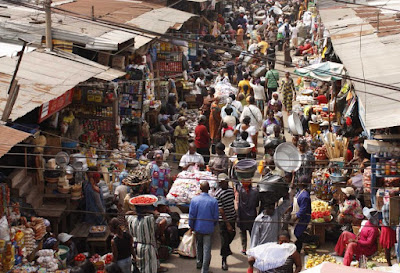 Mr Vitus Chinedu Enyeribe, the Chairman of Old Motor Spare Parts in Nkwo Nnewi has cried to Anambra State government to save the traders from a gully erosion that has sacked stall, even as crisis  rocking another section of the market deepens.
Mr Enyeribe, lamented that over fifteen shops have already been lost to the advancing erosion with other shops at the verge of being swallowed.
He said the association had applied all palliative measures it could afford to no avail "and the situation has gone beyond our control now."

Enyeribe said the erosion also destroyed goods in the market, as the incident mostly happened at nights after heavy rains. He said, victims of the disaster had remained helpless with the hope that government would come to their rescue, but to no avail.
The association chairman stressed, that it would be unfair that traders are paying taxes and the necessary levies in the market and still remained neglected. Apart from the erosion menace, he said there are no access roads into the market which he noted had greatly hampered trading activities in the market.

In a related development, traders at Agbo-Edo market, Nkwo had issued a fresh and firm warning to the leadership of the market not to tamper with their stalls allegedly marked out for demolition, as is being speculated by Christian Osuojukwu
Spokesman of the traders which have women in majority, Mr Ernest-Mary Ezenwa said, any attempt to knock at any stall by the leadership of the market union, Anambra State government or their agents in the market would receive stiff resistance.
He claimed that the Chairman of Nnewi North Council Area, Chukwudi Orizu and other stakeholders in the industrial community, said the demolisher should stay action until the issue is resolved and wondered why those behind the demolition would insist to go ahead.
He lamented what he called excessive taxation in the market without recourse to the level of income of the tax and levy payers in the market.
But the association leader in the market, Mr. Christopher Osuchukwu denied any excessive taxation. He said that all taxes and levies imposed in the market were according to State government's specifications with receipts. He explained that the traders were earlier notified on the said demolition meant to have good drainages in the market. He said it was government's plan and not the association's.
Email Post