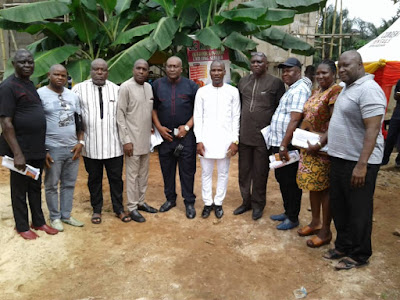 The standard flag bearer of APGA in Nnewi North, Comrade Smart Nonso Okafor has taken the victory trail to church, to thank God for seeing him through, in a keenly contested primaries, which saw to his emergence as the flag bearer of his party, in a bid to occupy the hallowed chambers in 2019.
While addressing newsmen after the church service, Comrade Smart Okafor, said he was thankful to God, for making it possible for his party, to have entrusted such a responsibility in his hands. He promised to carry the people along in his legislative responsibilities to move Nnewi forward.
He said that his focus is on ONAZI development bill, which is to make sure that Nnewi North development interests is well represented in the house. He stressed that the ONAZI development bill will be a project, ear marked to project the development of Onitsha, Nnewi and Awka in the budget, as these areas contribute to the major IGR of the state government in Anambra. He said that he believes that if these 3 towns contribute enormously to the IGR of the state, there should be major concentrate of allocation for projects in these areas.
On youth empowerment, he said that he build on the capacity of the youth, by empowering them internally, and intellectually, which should be first before giving them money or any equipment as empowerment. He said that he will empower the youths in other creative areas instead of giving them motor bikes, barrow and keke etc, which he said is no empowerment, but rather an empowerment that will help the youth to employ others.
He concluded by saying that it is better to lay one’s judgment on testimonies of the past than promises of the future, and that based on his antecedents, with the testimonies of people in what he has done in the past as a former SUG President, it leaves no one in doubt that he will do better in the near future if elected as the house member to represent Nnewi North at Anambra state house of Assembly come 2019.
Email Post