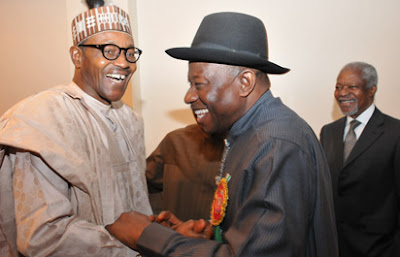 President Muhammadu Buhari has said that he would continue to hold the former President of Nigeria, Goodluck Jonathan, in high esteem because he (Jonathan) conceded defeat at the 2015 presidential election.

President Buhari made the statement on Thursday night when he hosted members of the Kannywood entertainment industry to a dinner at the Presidential Villa, Abuja. Buhari, while recalling his political struggles since 2003 when he made his first attempt to clinch the presidential seat, lauded Jonathan for accepting defeat in the 2015 general elections.

According to him, “I’ll continue to hold former president Jonathan in high esteem as a result of that singular act. “He (Jonathan) was in power as Deputy Governor, Governor (Bayelsa), Vice-President and President, all for about 10 years and he voluntarily accepted defeat and surrendered power to me,’’ he said. Buhari also reassured that the brutal activities of the Boko Haram sect in the country would soon become history. Former President Goodluck Jonathan who contested under the then ruling Peoples Democratic Party, PDP, had called the then, victorious Buhari of the All Progressives Congress, APC, party, for emerging winner of the presidential election held in 2015. Although Jonathan was the sitting President then, he had however conceded defeat to Buhari, saying his political ambition was not worth the blood of any Nigerian.
Email Post