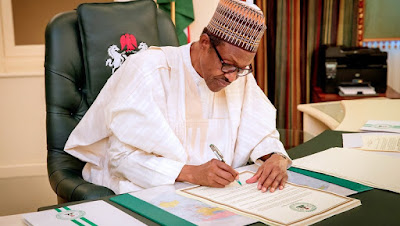 A judicial advocacy group, Access to Justice, has criticised President Muhammadu Buhari’s recent executive order barring 50 high profile Nigerians from travelling outside the country.
In a statement Sunday, the group said the president, by his action, is setting a dangerous precedent.
“While Access to Justice supports efforts to fight corruption in the most vigorous way possible, the PEO (Presidential Executive Order) is an unconstitutional overreach of the executive powers of government,” said Joseph Otteh, Director, Access to Justice.
“It usurps legislative and judicial powers, and particularly emasculates the powers of courts to determine cases against those named in the PEO and exercise its’ inherent jurisdiction to control conditions related to how under-trial (accused) persons exercise their rights to liberty and movement.”
Mr Buhari on Saturday announced that the 50 individuals, whose identities were not disclosed and whose assets are valued at N50 million and above, are subject of corruption investigation and litigation.
The announcement elicited heated reactions across the country, with the opposition Peoples’ Democratic Party accusing the president of attempting to foist “full-blown fascism” on the country.
The PDP’s presidential candidate at the 2019 election, Atiku Abubakar, described Mr Buhari’s action as a throwback to his infamous Decree 2 when he was a military ruler.
On Sunday, the Socio-Economic Rights and Accountability Project, SERAP, called for an immediate reversal of the travel ban.
In its statement, Access to Justice also urged the president to immediately rescind the “obnoxious” executive order.
“The PEO is also a gratuitous piece of dangerous precedent that opens the door to an uncontrollable dictatorship; it can be used arbitrarily and vindictively to fight and muzzle political opposition, and promote wholly politically partisan objectives. It is unquestionably anti-democratic and a veiled snare for citizens’ rights,” the group said.

The group further declared as untrue the government’s claim that the executive order was backed by the ruling of a high court judge, Ijeoma Ojukwu.
“It is also legally warrantless; the government claims the judgment of Hon. Justice Ijeoma Ojukwu on the case involving PEO 6, gives it authority to bar the named persons,” the statement continued.
“This is so very untrue: the judgment clearly required the government to implement PEO 6 in a way that is consistent with the rule of law; the court ruled that the government (Attorney General) could not block, freeze or confiscate any funds or assets without an order of court.
“If the government cannot take property without an order of court, how could it legitimately bar persons (presumed innocent by the law), from exercising their rights to liberty and movement without an order of court?
“Access to Justice requests the federal government to immediately rescind this obnoxious Executive Order.
“In its stead, we ask for Presidential Executive Orders that mandate all persons and authorities, in line with the Constitution, to obey all orders and judgments of courts immediately, release all persons ordered by courts to be set free, as well as pay reasonable living (minimum) wages to all workers.”
Email Post