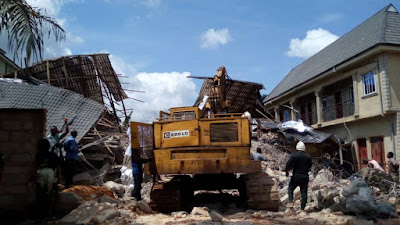 A 3-storey building under construction, yesterday, in Okpuno Otolo Nnewi,

Anambra State collapsed trapping eleven builders inside it. The building, according to residents living around the site, collapsed by 5:00am and trapped the builders who slept there to continue their work the next day.
However, eight people with various degrees of injuries were rescued and evacuated to a nearby health centre for first aid, before been moved to the emergency unit of Nnamdi Azikiwe University Teaching Hospital (NAUTH), Nnewi.
The ninth victim whose legs and arms were trapped in the debris was seen crying for help which took sympathizers a big task to accomplish. When he was finally rescued, though alive, his hands and legs were seen dangling because of the extent of damage done to them. He was equally taken to NAUTH emergency unit. But the remaining two victims trapped in the thicket of the debris whose cries of agony were faintly heard could not be easily approached for rescue as at the time of filing this report.
Police team led by the Nnewi Area Commander, ACP Nnanna Ama and the DPO Otolo Police Station, Mr Uro Justine Oko (SP) were all at the scene of the incident to prevent any chaos that could arise, because youths of the area were wearing long faces, because of the gory incident.
One of the survivors who gave his name as Sam said they were all on the first floor of the collapsed building including the engineer in charge of the construction work.
But the survivor said they were twelve not eleven and some were in the sitting room, bedroom and all that sleeping.
"At a point towards daybreak, I discovered that pieces of bricks were dropping on me where I was sleeping. I woke up others around me and we could not fathom what was going on until the entire house started shaking, that was when some of us who were awake began to run and the building finally collapsed," the survivor recounted. 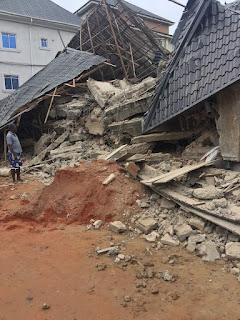 A community leader in the area, Obi Okpuno Otolo, Chief Emeka Okafor whose obi is a few meters away from the collapsed building said the owner, an Ozubulu man living in South Africa should not be blamed. He testified that building materials brought to the site for the construction work were all okay "the problem could be that the materials were economised, I can't say for sure."
Nnewi North Council Chairman, Chukwudi Orizu said he heard about the incident that early morning and rushed to the scene. He said he contacted Governor Willie Obiano of the State, his deputy, Dr Nkem Okeke and State Emergency Management Agency (SEMA) as well as a building construction company to deploy an excavator to the site for rescue of the trapped victims dead or alive.
Email Post