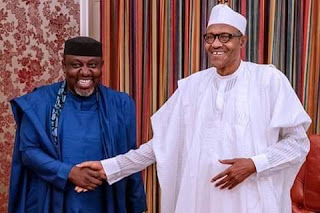 The embattled governor of Imo state Owelle Rochas Okorocha , today President Buhari an official visit to felicitate with him on his re election for a second term in office .

Nigerian Notch source at the presidency however  gathered that the governor's visit was not unconnected with the ongoing issues with his electoral mandate and speculations that EFCC will swoop on him soon. Some high ranking leaders of the party are angling for him to be finally expelled from the All Progressives Congress for his alleged anti -party activities in lmo state, by his support for AA, which they said put the party at a disadvantaged position during the last guber election in the state.

Last weekend , Owelle Rochas Okorocha gwas seen in Lagos at the 67th colloquium celebration of Ahmed Bola Tinubu; National leader of the party who is believed to have the wand in resolving many of the challenges governor Okorocha is currently facing.

Meanwhile , the issue of his certificate of return which is still being withheld by the Independent National Electoral Commission , INEC , given the controversy surrounded his declaration as the winner of the February 23rnd election for Imo West Senatorial District he contested against Hon. Jones Onyereri, has not abated as INEC and his party have not taken a stand because of the pending litigations in court. The matter comes up on the 4th of April in Abuja.
Email Post