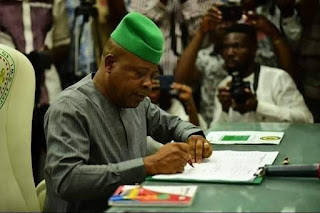 After the momentary hitch and delay in the implementation of the promise by the Imo State governor, His Excellency, Rt. Hon. Emeka Ihedioha CON KSC that his administration will revert back to paying workers in the service of Imo State 100% of their salaries as against the 70% that the ex-governor Rochas Okorocha was paying them, the promise will eventually come alive from the payment of the salary of August 2019.

A circular to that effect signed by the Accountant General of the State, Igbo Donald, confirmed that, urging all ministries, departments and agencies in the State to comply with the governor's directives on his promise.

Ordinarily, the payment of 100% salaries to Imo workers would have commenced with the June salary. But because the salary was computed based on subsisting 70% by oversight, it had to be paid as. When, however, the 70% was repeated in the recently paid July salary, the workers and the opposition screamed outrage.

It was amid the lamentations of the workers whose joy and happiness had been restored by the governor with his promise to pay 100% but dampened twice that the relevant authorities published the directive to all MDAs that the payment unfailingly commences with August salary.

There's no doubt that the workers joy and happiness quotient must have picked tempo again at the announcement of the new date of implementation of the governor's promise. To God be the glory and thanks to Gov. Ihedioha.

Now, there are a number of issues that serve as matters arising from the governor's largese. First, the revelation that there are over 5000 illegal names in the payroll of civil servants in the Imo State civil service. The alarm was raised by none other person than Comrade Austin Chilakpu, the State Chairman of the Nigeria Labour Congress (NLC).

With the final directive by Gov. Ihedioha for the 100% salary to be paid, it's believed that the criminals in the payroll must have been weeded out. Ex-governor Rochas Okorocha reportedly, hurriedly and illegally, added thousands of his people, his people to the payroll after the PDP and Gov. Ihedioha were declared winners of the Saturday, March 9, 2019 gubernatorial election.

Gov. Ihedioha had, however, warned that all illegal workers and ghost workers should just vamoose from the civil service and payroll because anybody caught will be treated as a criminal and made to face the full wrath of the law. That warning must have been accomplished before the directive to pay 100% beginning from end of August. The report on that will most likely be made public soon.

Then, there is the issue of the 100% being based on the "100% salary structure agreed and signed by Government and Joint Labour Unions in 2011". That too poses a matter arising.

Some voices from the opposition have queried why it has to be with 2011 agreement, insinuating that the current government was trying to shortchange Imo workers. But that thinking doesn't hold water because the workers know what 100% of their salaries should be. The fact that Rochas shortchanged them by 30%, paying them 70% for about three years, doesn't becloud their capacity and capability for knowing what their due 100% salaries should be.

For the avoidance of doubt, the prevalent salary structure is based on the last minimum wage of N18,000 that was instituted by the then president, Dr. Goodluck Ebele Jonathan, GCFR in 2011.

Therefore, instead of the opposition raising unnecessary eyebrows at Gov. Ihedioha's expression of sympathy and empathy, love and magnanimity, they should join Imo workers, their families and entire Imo people to be clapping for Jesus Christ at whose divine direction, Gov. Ihedioha is making things happen for the restoration of joy and happiness in Imo State.

What's left is for the beneficiaries, the Imo workers to remember always that to whom much is given, much is expected. They should appreciate the humanity Gov. Ihedioha has shown them by doing their work conscientiously and diligently, while praying for the success of the RebuildImo administration, vision and mission.

They must express support for the administration by being punctual to work and staying at work till close of work. They must treat the business of government with profit at heart. And that profit reflects in the visible working of government. It must not be business as usual.

Absenteeism and lateness must be duly sanctioned. Sabotaging the government must earn summary dismissal. All forms of embezzlement of government money must be fully penalized with sack, prosecution, conviction and incarceration.

Finally, Imo workers must bear it in mind that the restoration of lost glory of Imo State as a civil service State lies in their will to work and regain that status for the State. It will be to glory of God, the civil servants, the government and the people of Imo State. In the mighty name of Jesus Christ. Amen!

*Nwadike is the Special Assistant on Research to the Governor of Imo State.
Email Post