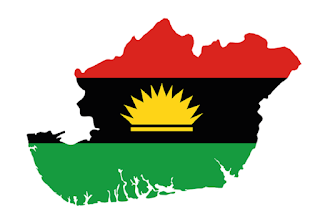 Rev. Fr. Paul Offu, a priest of the Catholic Diocese of Enugu was shot dead last night by Fulani terrorists along Ihe/Agbudu road in Awgu L.G.A of Enugu State.
His death is a direct consequence of a disgracefully timid and  failed leadership model of acquiesance to the dictates of Fulani rulership in return for crumbs, instituted and perfected by the likes of Nnia Nwodo, Dave Umahi, Ifeanyi Ugwuanyi, Willie Obiano, Okezie Ikpeazu and others in Igboland. Years of slavish submission to the whims of semi-literate Fulani cattle herders have reduced two successive generations of Igbo leadership since after the war to mere tools of the Fulani caliphate in their agenda of conquest and subbjugation of the south.

Nnia Nwodo, Dave Umahi, Rochas Okorocha, Ifeanyi Ugwuanyi, Okezie Ikpeazu, Willie Obiano were the key men that connived with this same murderous Fulani terrorists killing us to today, to ban, proscribe, kill and clamp down on IPOB- the only hope of the people. Had Ohaneze Ndigbo, Igbo governors and their cohorts supported IPOB in the formation and deployment of BSS, this senseless loss of the life at the hands of marauding primitive Fulani savages from the far north would have been prevented.

The family of Rev. Fr. Paul Offu and all beseiged communities in Enugu and Ebonyi must hold Ifeanyi Ugwuanyi, Dave Umahi, Nnia Nwodo, Ohaneze Ndigbo, Aka Ikenga, Nzuko Umunna, South East Governors’ Forum and other mushroom Lagos-Abuja based Igbo/Fulani socio-cultural associations resposible for these preventable deaths in our land. They are the people that conspired and supervised Operation Python Dance 2 that killed, detained and disappeared many IPOB in the calculated effort of Caliphate to neutralise the credible threat IPOB posed for their invading Fulani terror herdsmen.

Nnia Nwodo, his Ohaneze Ndigbo, Igbo governors along with a motley of Lagos-Abuja based Igbo associations, consciously worked with Abba Kyari’s Fulani cabal in Aso Rock to prepare the grounds for this takeover of our land by invading terror herdsmen. Meanwhile they have continued to issue meanigless press statements in their futile effort to deceive the idiotic and convince the gullible that they mean well for our people.

Contrast the behaviour of these quislings with that of Arewa Consultative Forum, Northern Elders Forum and Northern governors, that have continued to offer overt and covert support to Fulani terror herdsmen the fourth most deadly terrorist group in the world, in their effort to conquer and Fulanise the south. No Emir, Shehu or traditional ruler in the north has ever gone on record to condemn the killings perpetrated by their fellow rampaging Fulani herdsmen but Nnia Nwodo, Igbo governors and Lagos-Abuja domiciled Efulefus conspired with the Fulani government of APC to clampdown on IPOB a peaceful movement.

The only people that stood and still standing against Fulani terror invasion of the south today is the same IPOB that Nnia Nwodo, Dave Umahi, Rochas Okorocha, Ifeanyi Ugwuanyi, Okezie Ikpeazu and Willie Obiano sought to destroy. Regrettably IPOB cannot prevent every death at the hands of Fulani herdsmen because we are fighting on multiple fronts with limited resources and constant sabotage from South East Governors and Ohaneze Ndigbo. British backed despotic and tyrannical government in Nigeria, a well financed and coordinated terror invasion of Biafraland by Fulani terrorists and home growm treachery of the likes of Nnia Nwodo, Dave Umahi, Okezie Ikpeazu, Rochas Okorocha, Willie Obiano and Ifeanyi Ugwuanyi are obstacles we IPOB have to overcome on a daily basis in our march towards Biafra freedom. We lack the resources to be everywhere at the same time.
Notwithstanding, we have successfully stopped many large scale Fulani terror invasions and will continue to do so but what we have not been able to do is to prevent the murder of individuals by Fulani terror groups. Until Igbo governors withdraw their allegiance to Fulani caliphate and stop working against IPOB, these deaths at the hands of northern terrorists will continue.
Much work lies in the weeks and months ahead for IPOB but in the end we shall prevail against powerful external enemies and dominant domestic triators. We must not relent.
SIGNED: