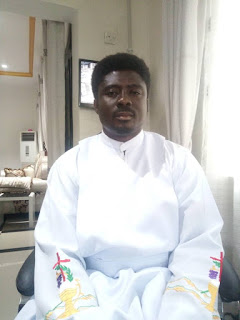 Founder and Spiritual Director of the Holy Ghost Adoration Ministry, Uke, Anambra state, Rev. Fr. Emmanuel Obimma, popularly known as Fr. Ebube Muonso, has narrated how he escaped death by the whiskers when suspected cults boys in his community, Nkwelle-Ezunaka, attacked him because of a sermon he preached in the church.

The notable Catholic clergy, in a chat with our reporter, said the incident took place after his homily during a funeral service at St. William’s Catholic Church, Nkwelle- Ezunaka, Oyi local government area of the state, where he fearlessly preached against the evil of cultism, which, according to him, has permeated the very fabrics of the community.

He said, “In the course of my homily during the funeral mass on June 12, 2020, I vehemently preached against cultism and cult groups, terrorism and hooliganism, which was common among young men in the community.  Our youths are used to forming cult groups, which they use as weapons to intimidate people and unleash terror on innocent residents of the community. In Nkwlle-Ezunaka, people, including elders and the elites, sleep with their two eyes opened, because of cultists. Many elderly men and women in the community have been rough-handled, beaten and flogged by these hooligans.

“So, during the burial mass, I ceased the opportunity to condemn their evil activities, and to caution them. As I was preaching that day, the congregations were shouting, saying that they knew only Fr. Ebube Muonso could have the guts to speak out against the evil perpetrated by the cult groups in that village.”

The priest of the Onitsha Archdiocese, expressed surprise that after his sermon in the church, some of the suspected cultists waylaid him, rough-handled him and smashed his vehicle, to the chagrin of other members of the community.

According to him, “As I was at home talking with my mother after the church service, my brother’s wife called my attention that some bad boys, popularly known as Searchlight, were outside our compound chanting their war songs and saying that they would humiliate Fr. Ebube Muonso. I thought it was empty threat; but on my way going out, the boys invaded me with dangerous weapons. They threw stones at me, smashed and damaged my vehicle. In the course of doing so, I had to put a call across, and, eventually, a combined team of police and army arrived and rescued me. Even when the soldiers arrived, the bad boys still brandished their weapons, so that the soldiers even threatened to shoot them; but I pleaded with them not to shoot.

“Eventually, I petitioned the police. Eleven of them were arrested. They were tried in the court of law, and eventually, remanded in prison custody, to serve as corrective measure, and also to deter them and others from such act. As if that was not enough, their sponsors and allies, who escaped arrest, started blackmailing me; peddling all sorts of falsehood against me on the social media. In their posts on the social media, they said that they attacked me because I collected their lands; about 200 plots in Nkwelle-Ezunaka; whereas, in reality, I do not have one plot of land in that village. They actually attacked me because I preached against their cult activities. The townspeople know the truth.

Fr. Ebube Muonso further claimed that the stock-in-trade of the group called ‘Searchlight’ was to rape, maim, extort and terrorise innocent members of the community, who must chose to remain silent at whatever provocation.

“A lot of young girls have been raped. Parents, who send their daughters on errands, get the shock of their lives when their girls return with the complaint that they were gang-raped by the Searchlight boys. They equally torture and flog elderly people, who kick against their activities. Story was told of a woman, who was going out with his son on an errand. And unfortunately for her, the bad boys harassed her, beat her up and stripped her before her son; claiming that she looked at them. Whenever people have cases in the village, they would hire these boys to fight for them, after paying the amount of money the cult boys would demand. In fact, for an average Nkwelle-Ezunaka person, it would be better for a person to be taken to the police station or charged to court than for one to fall into the hands of these boys. They had suppressed and inflicted injuries in many people. Imagine small boys flogging elderly people in the community. They engage in broad day robbery and all forms of criminality. They would claim omnipotence and untouchable. People, I must tell you, are afraid of them. They have constituted themselves into both police and the court of law; such that when you report any case to them against another person, they will go for war on your behalf. They arrest, try, convict and punish their victim.”

He expressed disappointment that majority of people he assisted in one way or the other were among those that attacked him and accused him of land grabbing;  adding that he was made to understand that the boys were not alone in their nefarious activities; but were only acting out scripts of their sponsors.

“I have empowered a good number of them. I’ve sent a good number abroad in order to improve their lives. I offered scholarships to the siblings and children of these people, who are after my life. Ebuka Obiozo, one of the cult boys that attacked me, was among the people I strived to lift out of poverty. I gave him money several times. It was because of him that I invited footballers like Emenike and Kanu Nwankwo to take him up in order to enhance his football career. I am yet to understand the core reason for the attack launched against me. They are doing this to intimidate me as they use to intimidate others; but Fr. Ebube Muonso cannot be intimidated!” He added.

While urging the court to ensure that him and innocent members of the Nkwelle-Ezunaka community get justice for evil meted on them by the boys, the clergyman, who also claimed that the suspected cult boys were into blood covenant, urged government to beef-up the anti-cult unit of the police force, so that cultism would be reduced. He also urged partnership among the church, the family, government and law enforcement agencies, in order to fight the decadent process.

“I hold no malice against them. The reason they are still in the correctional facility is to discipline them, so that when they come out, they will become better and more responsible members of the society. They need to be tamed, so that they will understand that hooliganism is bad. I do not pray that they stay long in prison. My aim is to tell them that what they did was wrong,” he concluded.