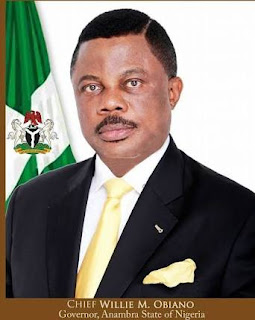 Governor Willie Obiano who made this declaration in a statewide broadcast said it was necessary to nip in the bud the envisaged unpleasant incidents that has been recorded so far in the state as well as the rising tension in the country.

He stated that the anger of #EndSars protesters is justifiable, but tasked the protesters to be peaceful in carrying it out.

Consequently, Governor Obiano declared that all schools and markets in the state have been closed down, stressing that all large gatherings in any form are banned.

He said that the security agencies are on notice to do the needful, asking them to resist all efforts to provoke them to the use of extreme force.

The Governor therefore called on stakeholders including the clergy, traditional rulers, youth leaders, among others, to lend their voices and help address the escalating situation, adding that the sum of two hundred million naira has been approved to compensate families of those affected by SARS brutality in the state.

He concluded by saying that this is not the time for destructive rumours, but a time to unite and keep Anambra state safe.