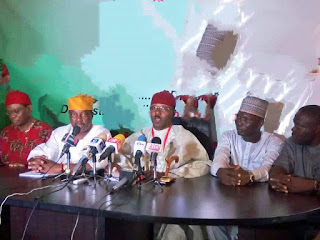 The national leader of the Coalition; Engr. Nwosu Emmanuel stated this while addressing newsmen in Abuja in the early hours of Monday, 5th April 2021.

He condemned in its entirety the unwaton destruction of Public properties by those he considered to be enemies of the state, Ndigbo and Nigeria in general.

"The evil act of these criminals have greatly  endangered the lives of Imo people in particular and the South East as a whole"; Nwosu declared.

He warned that this is opposition politics taken too far and called on the IG of Police Mohammed Adamu to bring down the full weight of the force on these miscreants.

Nwosu called on opposition politicians to leave Imo State alone and allow the People's Governor; His Excellency Distinguished Senator Hope Uzodinma to continue with his excellent job of transforming the State as he has done since he took office a year ago.

He urged detractors to stay off the South East, as Ndigbo and peace loving, wondering why such fate will befall Imo state the eastern heartland.

Meanwhile, In a press release made available to the press by Force PRO, Frank Mbah, in Ref No.CZ.5300/FPRD/FHQ/ABJ/VOL.3/81, stated that the IGP has directed the Commissioner of Police in Imo and the Special Investigation Team to Fish-Out and Bring Perpetrators to Book

The Inspector-General of Police, IGP M.A Adamu, NPM, mni ordered the immediate deployment of additional units of Police Mobile Force (PMF) and other Police Tactical Squads to Imo State to strengthen security in the State and prevent further attacks on security formations or any other critical national infrastructure in the State.

The IGP gave the directives following the attack on security operatives and formations including the Imo State Police Command Headquarters and the Headquarters of the Nigerian Correctional Services (NCS) in Owerri in the early hours of today, Monday, 5th April, 2021.

The attempt by the attackers to gain access to the Police armoury at the Headquarters was totally and appropriately resisted by Police operatives on duty who repelled the attackers and prevented them from breaking-in and looting the armoury. The armoury is thus intact! Similarly, the police suffered no human casualty, apart from a police Constable who sustained a minor bullet wound on his shoulder.

However, one of the operational vehicles of the attackers has been recovered by the Police and is currently being subjected to forensic scrutiny and investigations.

The IGP, condemned the attack on the security outfits, and further directed the Commissioner of Police, Imo State Command and a new Special Investigation Team (specifically set up to deal with cases of incessant attacks on security formation/operatives in the region), and to carry out holistic investigations into the incident with a view to fishing-out the perpetrators and bringing them to justice.

The release further stated that the CP is to harness the security reinforcement squads and other operational assets at his disposal to take the battle to the door-steps of the attackers and prevent any further attack anywhere within the State and its environs.

The IGP, described the deliberate and criminal attack on security operatives as an attack on the soul of our nation, and enjoined leaders in Imo State, the South-East and other parts of the country to speak out against the unfolding violence and criminality.

The IGP further called on the citizens to avail Police and other security agencies with useful information that can assist in identifying and arresting the criminals. He vowed that the perpetrators will be brought to book, noting that the Force is doing all within its powers to curb the activities of unscrupulous elements hell-bent on threatening the unity, safety, security and socio-ecomomic wellbeing of Nigerians.