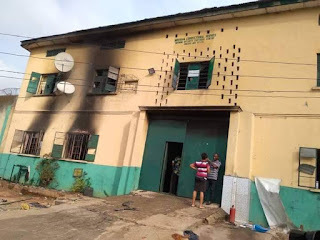 The Nigerian Correctional Service (NCoS) has stated that 1,844 inmates escaped following the attack on its custodial centre in Owerri, the Imo State capital.

According to a statement by NCoS spokesman, Francis Enobore, the yet to be identified gunmen had stormed the facility in the early hours of Monday 5th April 2021, gained entrance into the yard by using explosives to blast the administrative block open.

The statement however stated that 35 inmates refused to escape while others fled.

A comprehensive investigation into the incident has been ordered by the Acting Controller-General of Corrections, John Mrabure. This is to be carried out in conjunction with other security agencies.

Enobore’s statement reads: “The Owerri Custodial Centre in Imo State has been attacked by unknown gunmen and forcefully released a total of 1,844 inmates in custody.

“The attackers who stormed the facility at about 0215hrs on Monday 5th April, 2021, gained entrance into the yard by using explosives to blast the administrative block.

“They were said to have arrived the centre in their large number in several Hilux pick-up vans and Sienna Buses armed with sophisticated weapons and immediately engaged the security personnel on duty in a fierce gun battle. They eventually detonated the explosive to gain entrance.

“The Acting Controller-General of Corrections, John Mrabure has ordered a comprehensive investigation into the incident and in collaboration with other security organizations, commenced a search and recovery operations to recapture the fleeing inmates.

“While appealing to the good citizens of Imo State and indeed Nigerians to volunteer useful intelligence that will facilitate the recovery effort, the Ag. Controller-General wishes to assure that the security of custodial centres in the country remains sacrosanct.

“He equally directed all officers attached to custodial facilities to remain vigilant at this trying moment in our history.

“As at the last count, 6 inmates have so far voluntarily returned to the facility while 35 inmates refused to escape from custody during the attack.

In his reaction to the incident, Governor Hope Uzodimma stated that the aim of the attack is to instill fear in Imo people.

The governor however did not mention who was attempting to intimidate his people but noted that his government will rise and face the challenge headlong.

“This unfortunate tragedy can only be condemned by every reasonable mind and I want to assure that the intention is to put fear into our people and make them vulnerable. I can assure you that working with security agencies, we will rise to the occasion and rise to the matter.

“I have already commissioned a detailed investigation into this incident with a view to finding out the masterminds and the perpetrators of this ugly incident. Luckily for us, no life was lost. However, properties were destroyed.

“This level of gangsterism that often takes life is not acceptable by any government. After all, what is government? The primary function for government to protect lives and properties. I don’t think there will be any reasonable government that will sit back, watch this type of thing happen without taking drastic measures,” Governor Uzodimma asserted.

He urged Imo people to be calm and assured that the escaped inmates will be rearrested.