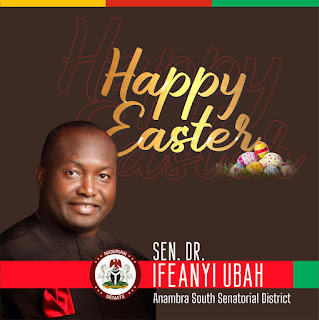 Announces Thank You And Declaration Tour.

Senator Ifeanyi Ubah, stated this earlier today, in his goodwill message to Anambrarians as they celebrate the significant date of great essence in the Christian calendar. He affirmed that Easter denotes the redemption of mankind and gives Christians renewed hope of life and belief in God. Senator Ubah also proclaimed that "A New Anambra Of Our Dreams Is Possible".

In his words: "The washing away of our sins, restoration of innocence and joy brought to us through the resurrection of Jesus Christ, makes it an extremely paramount Christian festival, and one celebrated with the greatest joy. " 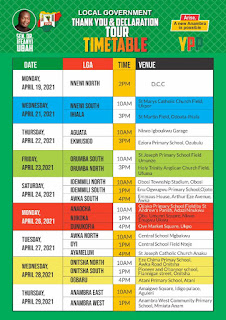 "For Christians all over the world, the knowledge of the truth that Jesus died to pay the penalty of death that we deserve for our sins and rose with a glorified body, gaining victory over death and the grave is the foundation upon which the  Christian faith was built,", he said.

As a devout Christian, Senator Ifeanyi Ubah believes that without  the ultimate sacrifice and resurrection of Jesus Christ, there would be no Christianity. He stated that " however terrible the suffering was, it was part of God's plan for the salvation of mankind."

To mark the celebrations, the Distinguished Senator representing Anambra South Senatorial District revealed that he intends to kickstart his Thank You and Declaration Tour in the entire 21 Local Government Areas in Anambra State starting from Nnewi North LGA on April 19, 2021.

He called on all his teeming supporters and lovers of a new and working Anambra of our dreams to kindly check the timetable(attached) and endeavour to be part of this epoch-making train as it berths in their respective Local Government Areas.

Conclusively, Senator Ubah, on behalf of his family, in the spirit of love and humanity, sent his prayers and Felicitations to families, communities and the nation at large.

"May this Easter bring us unprecedented peace and unity that will strengthen the bonds in our homes and society and also usher in the beginning a new era in Anambra State  ".